Judgment Ridge: The True Story Behind the Dartmouth Murders (Paperback) 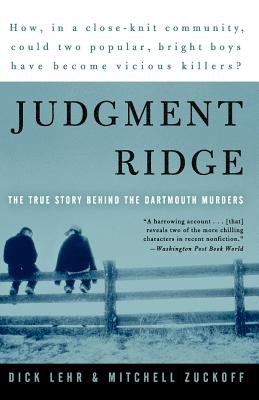 A riveting investigation of the brutal murders of two Dartmouth professors –– a book that, like In Cold Blood, reveals the chilling reality behind a murder that captivated the nation.

On a cold night in January 2001, the idyllic community of Dartmouth College was shattered by the discovery that two of its most beloved professors had been hacked to death in their own home. Investigators searched helplessly for clues linking the victims, Half and Susanne Zantop, to their murderer or murderers. A few weeks later, across the river, in the town of Chelsea, Vermont, police cars were spotted in front of the house of high school senior Robert Tulloch. The police had come to question Tulloch and his best friend, Jim Parker. Soon, the town discovered the incomprehensible reality that Tulloch and Parker, two of Chelsea's brightest and most popular sons, were now fugitives, wanted for the murders of Half and Susanne Zantop.

Authors Mitchell Zuckoff and Dick Lehr provide a vivid explication of a murder that captivated the nation, as well as dramatic revelations about the forces that turned two popular teenagers into killers. Judgement Ridge conveys a deep appreciation for the lives (and the devastating loss) of Half and Susanne Zantop, while also providing a clear portrait of the killers, their families, and their community—and, perhaps, a warning to any parent about what evil may lurk in the hearts of boys.

Dick Lehr is a professor of journalism at Boston University. He is the author of six previous works of nonfiction and a novel for young adults. Lehr coauthored the New York Times bestseller and Edgar Award Winning Black Mass: Whitey Bulger, the FBI and a Devil’s Deal, which became the basis of a Warner Bros. film of the same name. His most recent nonfiction book, The Birth of a Movement: How Birth of a Nation Ignited The Battle for Civil Rights, became the basis for a PBS/Independent Lens documentary. Two other books were Edgar Award finalists: The Fence: A Police Cover-up Along Boston’s Racial Divide, and Judgment Ridge: The True Story Behind The Dartmouth Murders. Lehr previously wrote for the Boston Globe, where he was a member of the Spotlight Team, a special projects reporter and a magazine writer. While at the Globe he was a Pulitzer Prize finalist in investigative reporting and won numerous national and local journalism awards. Lehr lives near Boston.

Mitchell Zuckoff is the Sumner M. Redstone Professor of Narrative Studies at Boston University. He covered 9/11 for the Boston Globe and wrote the lead news story on the day of the attacks. Zuckoff is the author of seven previous works of nonfiction, including the number one New York Times bestseller 13 Hours: The Inside Account of What Really Happened in Benghazi, which became the basis of the Paramount Pictures movie of the same name. His earlier books also include the New York Times bestsellers Lost in Shangri-La and Frozen in Time. As a member of the Boston Globe Spotlight Team, he was a finalist for the Pulitzer Prize in investigative reporting and the winner of numerous national awards. He lives outside Boston.

“One of the best books of the year.”
— Boston Globe

“I was spellbound by this brilliantly reported and intricately plotted account of the Dartmouth murders. The collision of good and evil in a small New England town is scary and heartbreaking.”
— Dominick Dunne

“Zuckoff and Lehr...examine in fascinating detail the ordinariness of the boys’ grudges—typical high school controversies about the student council and the debate team—and how, in Tulloch’s mind, the idea of random killing became an obsession.”
— The New Yorker

“Join[s] Truman Capote’s classic, In Cold Blood, as one of the standards in crime writing.”
— Boston Globe

“Irresistible...It pulls you in.”
— Hartford Courant

“Spellbinding ... [reveals] the story behind the headlines....Multifaceted and richly believable.”
— Denver Post

“A sorrowful tale of teenagers drawn to murder, artfully structured....the crime seems at once unspeakable and inescapable.”
— Kirkus Reviews

“A chilling and revealing look at a crime that fueled concerns about adolescents and violence in a post-Columbine environment.”
— Booklist

“A masterpiece of investigative reporting that provides sophisticated, bone-chilling insights into the “Dartmouth Murders” and the inner workings of the minds of two seemingly ‘normal’ teenage boys.”
— William S. Pollack, author of Real Boys: Rescuing Our Sons from the Myths of Boyhood

“Judgment Ridge is a tragic and fascinating story of two boys and their profoundly disturbing friendship. If you wonder how “bored” boys can become violent boys, if you worry about the vacuum in which American boys are being raised today, you will find this beautifully written book a compelling read.”
— Michael Thompson, co-author of RAISING CAIN: Protecting the Emotional Life of Boys

“In the tradition of Compulsion, In Cold Blood and The Executioner’s Song, Judgment Ridge has the tragic inevitability of a great novel…I cannot remember when I read a book that was at once so compelling and so harrowing.”
— Madeleine Blais, author of In These Girls, Hope Is a Muscle

This feature require that you enable JavaScript in your browser.
END_OF_DOCUMENT_TOKEN_TO_BE_REPLACED

This feature require that you enable JavaScript in your browser.
END_OF_DOCUMENT_TOKEN_TO_BE_REPLACED

This feature require that you enable JavaScript in your browser.
END_OF_DOCUMENT_TOKEN_TO_BE_REPLACED