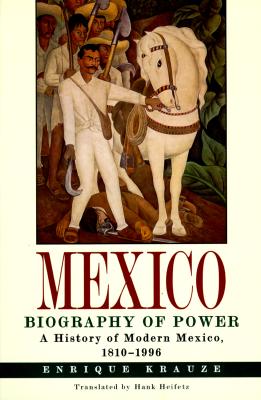 By Enrique Krauze
$35.00
Special Order - may be out of print

The concentration of power in the caudillo (leader) is as much a formative element of Mexican culture and politics as the historical legacy of the Aztec emperors, Cortez, the Spanish Crown, the Mother Church and the mixing of the Spanish and Indian population into a mestizo culture. Krauze shows how history becomes biography during the century of caudillos from the insurgent priests in 1810 to Porfirio and the Revolution in 1910. The Revolutionary era, ending in 1940, was dominated by the lives of seven presidents -- Madero, Zapata, Villa, Carranza, Obregon, Calles and Cardenas. Since 1940, the dominant power of the presidency has continued through years of boom and bust and crisis. A major question for the modern state, with today's president Zedillo, is whether that power can be decentralized, to end the cycles of history as biographies of power.

Enrique Krauze is the author of twenty books, including Mexico: Biography of Power. He has written for The New York Times, The New Republic, Dissent magazine, The Washington Post, and The New York Review of Books. Krauze lives in Mexico City.

This feature require that you enable JavaScript in your browser.
END_OF_DOCUMENT_TOKEN_TO_BE_REPLACED

This feature require that you enable JavaScript in your browser.
END_OF_DOCUMENT_TOKEN_TO_BE_REPLACED

This feature require that you enable JavaScript in your browser.
END_OF_DOCUMENT_TOKEN_TO_BE_REPLACED