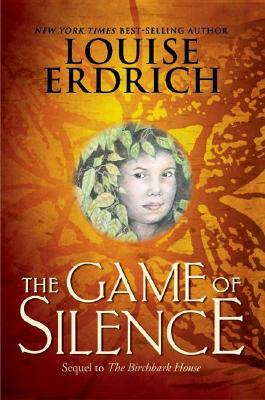 This is book number 2 in the Birchbark House series.

Winner of the Scott O'Dell Award for Historical Fiction, The Game of Silence is the second novel in the critically acclaimed Birchbark House series by New York Times bestselling author Louise Erdrich.

Her name is Omakayas, or Little Frog, because her first step was a hop, and she lives on an island in Lake Superior. One day in 1850, Omakayas’s island is visited by a group of mysterious people. From them, she learns that the chimookomanag, or white people, want Omakayas and her people to leave their island and move farther west.

That day, Omakayas realizes that something so valuable, so important that she never knew she had it in the first place, could be in danger: Her way of life. Her home.

The Birchbark House Series is the story of one Ojibwe family’s journey through one hundred years in America. The New York Times Book Review raved about The Game of Silence: “Erdrich has created a world, fictional but real: absorbing, funny, serious and convincingly human.”

Louise Erdrich is the author of fifteen novels as well as volumes of poetry, children’s books, short stories, and a memoir of early motherhood. Her novel The Round House won the National Book Award for Fiction. The Plague of Doves won the Anisfield-Wolf Book Award and was a finalist for the Pulitzer Prize, and her debut novel, Love Medicine, was the winner of the National Book Critics Circle Award. Erdrich has received the Library of Congress Prize in American Fiction, the prestigious PEN/Saul Bellow Award for Achievement in American Fiction, and the Dayton Literary Peace Prize. She lives in Minnesota with her daughters and is the owner of Birchbark Books, a small independent bookstore.

This feature require that you enable JavaScript in your browser.
END_OF_DOCUMENT_TOKEN_TO_BE_REPLACED

This feature require that you enable JavaScript in your browser.
END_OF_DOCUMENT_TOKEN_TO_BE_REPLACED

This feature require that you enable JavaScript in your browser.
END_OF_DOCUMENT_TOKEN_TO_BE_REPLACED