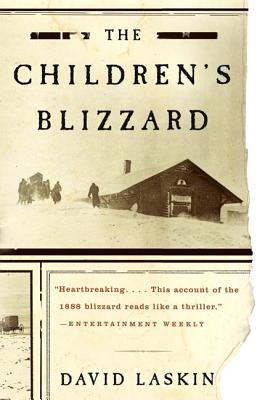 “David Laskin deploys historical fact of the finest grain to tell the story of a monstrous blizzard that caught the settlers of the Great Plains utterly by surprise. . . . This is a book best read with a fire roaring in the hearth and a blanket and box of tissues near at hand.”  — Erik Larson, author of The Devil in the White City

The gripping true story of an epic prairie snowstorm that killed hundreds of newly arrived settlers and cast a shadow on the promise of the American frontier.

January 12, 1888, began as an unseasonably warm morning across Nebraska, the Dakotas, and Minnesota, the weather so mild that children walked to school without coats and gloves. But that afternoon, without warning, the atmosphere suddenly, violently changed. One moment the air was calm; the next the sky exploded in a raging chaos of horizontal snow and hurricane-force winds. Temperatures plunged as an unprecedented cold front ripped through the center of the continent.

By the next morning, some five hundred people lay dead on the drifted prairie, many of them children who had perished on their way home from country schools. In a few terrifying hours, the hopes of the pioneers had been blasted by the bitter realities of their harsh environment. Recent immigrants from Germany, Norway, Denmark, and the Ukraine learned that their free homestead was not a paradise but a hard, unforgiving place governed by natural forces they neither understood nor controlled.

With the storm as its dramatic, heartbreaking focal point, The Children's Blizzard captures this pivotal moment in American history by tracing the stories of five families who were forever changed that day. David Laskin has produced a masterful portrait of a tragic crucible in the settlement of the American heartland.

The P.S. edition features an extra 16 pages of insights into the book, including author interviews, recommended reading, and more.

David Laskin is the author of The Children's Blizzard, winner of the Midwest Booksellers' Choice Award for nonfiction and the Washington State Book Award. His writing has appeared in The New York Times, The Wall Street Journal, and Smithsonian magazine. He lives in Seattle, Washington.

“Heart-breaking. . . . This account of the 1888 blizzard that killed more than 100 children in the Great Plains reads like a thriller. . . . Laskin reminds us that the pioneer life wasn’t so much romantic as it was deadly.” — Entertainment Weekly

“Terrifying and often vivid. . . . Laskin skillfully weaves together a clear report and explanation of the meteorological event with harrowing accounts of slow death, loss, and, survival. This book should be read by anyone wishing to fathom the terrible cost of settling that desolate, dangerous, and beautiful land.” — The Atlantic Monthly

“Laskin has written a fascinating account of the day the wind finally did what it always promises to do on those bleak Dakota prairies. . . . [He] has chosen his subject brilliantly, for something did change in that winter blast.” — Wall Street Journal

“Terrifying and often vivid…. Laskin skillfully weaves together a clear report and explanation of the meteorological event with harrowing accounts of slow death, loss, and, survival.” — The Atlantic Monthly

“In The Children’s Blizzard, David Laskin deploys historical fact of the finest grain to tell the story of a monstrous blizzard that caught the settlers of the Great Plains utterly by surprise. Using the storm as a lens, Laskin captures the brutal, heartbreaking folly of this chapter in America’s history, and along the way delves into the freakish physics of extreme cold. This is a book best read with a fire roaring in the hearth and a blanket and box of tissues near at hand.” — Erik Larson, author of Isaac’s Storm and The Devil in the White City

“Laskin excels at making these Plains pioneers live again, whether they survived or succumbed to the storm. . . . This book about flatlands is sharp enough that the thoughts and failings of mountain climbers become crystal-clear.” — USA Today

“The American prairie has its indelible epics —the luck-charmed journey of Lewis and Clark, the Oregon Trail tales and travails—and The Children’s Blizzard adds to our trove of western lore the nearly lost story of a mighty blow of nature. David Laskin’s telling of the immense 1888 blizzard that struck the homestead communities of the Dakotas and beyond is elegant in its research and eloquent in its recountings of prairie dwellers facing impossible weather. This is a haunting book about the odds stacked against the settlers of the American heartland.” — Ivan Doig, author of This House of Sky

“Laskin pulls no punches. . . . The Children’s Blizzard is a welcome contribution to the historical literature of American life and westward expansion.” — Chicago Sun-Times

“A gripping chronicle of meteorological chance and human folly and error. . . . Novelistic [and] consistently affecting. . . . A rewarding read.” — Publishers Weekly

“Like a ride down a steep, icy hill on a toboggan, the story gathers speed. . . . Even though you know how the tragic story ends with its inevitable conclusion, it’s a tale to savor.” — The Des Moines Register

“An adroit, sensitive drama and a skillful addition to a popular genre. . . . A perceptive presentation, evoking lives unnoticed by history but for the tragedy of this storm.” — Booklist

“David Laskin has produced a book at once terrifying and engrossing about the epoch blizzard that left an estimated 250 to 500 dead across the frigid plains of Nebraska and the Dakota Territory.” — The Lincoln Journal Star

“A tale of horror and heroism: gripping, terrifying, and definitely worth the read. . . . What makes The Children’s Blizzard amazing are the survival stories from people stranded in the sub-zero whiteout.” — Manchester Union Leader

“A heartrending tale. . . . With a flair for novelistic detail, Laskin brings many of these settlers back to life as he follows the fortunes of immigrant families. . . . Every page of the engrossing narrative explores the uncomfortable reality of human frailty when confronting insurmountable odds.” — Minneapolis Star Tribune

“Told through the awed, disbelieving eyes of storm victims. . . . The Children’s Blizzard recounts a poignant, heartbreaking chapter in American history. Laskin draws on firsthand accounts of the snowstorm to produce an intimate, human-scale tale of climatic cataclysm.” — Seattle Weekly

This feature require that you enable JavaScript in your browser.
END_OF_DOCUMENT_TOKEN_TO_BE_REPLACED

This feature require that you enable JavaScript in your browser.
END_OF_DOCUMENT_TOKEN_TO_BE_REPLACED

This feature require that you enable JavaScript in your browser.
END_OF_DOCUMENT_TOKEN_TO_BE_REPLACED