It's in His Kiss (Mass Market Paperbound) 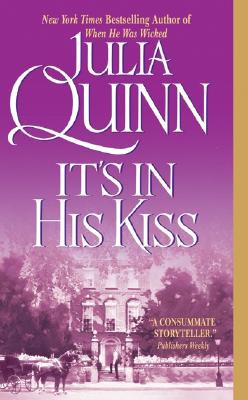 Meet Our Hero . . .
Gareth St. Clair is in a bind. His father, who detests him, is determined to beggar the St. Clair estates and ruin his inheritance. Gareth's sole bequest is an old family diary, which may or may not contain the secrets of his past . . . and the key to his future. The problem is--it's written in Italian, of which Gareth speaks not a word.

Meet Our Heroine . . .
All the ton agreed: there was no one quite like Hyacinth Bridgerton. She's fiendishly smart, devilishly outspoken, and according to Gareth, probably best in small doses. But there's something about her--something charming and vexing--that grabs him and won't quite let go . . .

Meet Poor Mr. Mozart . . .
Or don't. But rest assured, he's spinning in his grave when Gareth and Hyacinth cross paths at the annual--and annually discordant--Smythe-Smith musicale. To Hyacinth, Gareth's every word seems a dare, and she offers to translate his diary, even though her Italian is slightly less than perfect. But as they delve into the mysterious text, they discover that the answers they seek lie not in the diary, but in each other . . . and that there is nothing as simple--or as complicated--as a single, perfect kiss.

This feature require that you enable JavaScript in your browser.
END_OF_DOCUMENT_TOKEN_TO_BE_REPLACED

This feature require that you enable JavaScript in your browser.
END_OF_DOCUMENT_TOKEN_TO_BE_REPLACED

This feature require that you enable JavaScript in your browser.
END_OF_DOCUMENT_TOKEN_TO_BE_REPLACED