Rough Crossings: The Slaves, the British, and the American Revolution (Paperback) 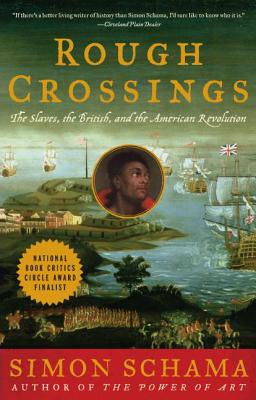 “The most dramatic account so far of the extraordinary expeience of slaves in and after the American Revolution. . . . Schama’s gift for plunging us into the very center of the action makes reading an exhilarating and often moving experience.”—Daily Telegraph

If you were black in America at the start of the Revolutionary War, whom would you want to win? In response to a declaration by the last governor of Virginia that any rebel-owned slave who escaped and served the King would be emancpated, tens of thousands of blacks voted with feet, escaping to fight beside the British. Originally designed to break the plantations of the American South, this military strategy instead unleashed one of the great exoduses in American history.

Told in the voices of the slaves and the white abolitionists who aided them, Simon Schama vividly details the odyssey of these escaped blacks, shedding light on an extraordinary chapter in America’s birth.

Simon Schama is University Professor of Art History and History at Columbia University in New York. His award-winning books include Scribble, Scribble, Scribble; The American Future: A History; National Book Critics Circle Award winner Rough Crossings; The Power of Art; The Embarrassment of Riches: An Interpretation of Dutch Culture in the Golden Age; Citizens: A Chronicle of the French Revolution; Dead Certainties (Unwarranted Speculations); Landscape and Memory; Rembrandt's Eyes; and the History of Britain trilogy. He has written and presented forty television documentary films for the BBC, PBS, and The History Channel, including the Emmy-winning Power of Art, on subjects that range from John Donne to Tolstoy.

“If there’s a better living writer of history than Simon Schama, I’d sure like to know who it is.” — Cleveland Plain Dealer

“. . .plenty of gorgeous writing from this most elegant of stylists.” — Christian Science Monitor

Simon Schama’s Rough Crossings . . . brilliantly re-creates the histories of runaway slaves in and after the American revolution. — Sunday Times (London)

“A lively and accessible book.” — Newsday

” Schama is back at his best -and historians don’t come much better than that. — Sunday Times (London)

This feature require that you enable JavaScript in your browser.
END_OF_DOCUMENT_TOKEN_TO_BE_REPLACED

This feature require that you enable JavaScript in your browser.
END_OF_DOCUMENT_TOKEN_TO_BE_REPLACED

This feature require that you enable JavaScript in your browser.
END_OF_DOCUMENT_TOKEN_TO_BE_REPLACED