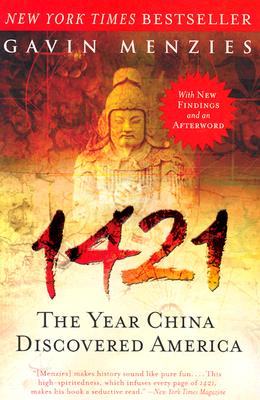 On March 8, 1421, the largest fleet the world had ever seen set sail from China. Its mission was "to proceed all the way to the ends of the earth to collect tribute from the barbarians beyond the seas" and unite the whole world in Confucian harmony.

When it returned in October 1423, the emperor had fallen, leaving China in political and economic chaos. The great ships were left to rot at their moorings and the records of their journeys were destroyed. Lost in China's long, self-imposed isolation that followed was the knowledge that Chinese ships had reached America seventy years before Columbus and had circumnavigated the globe a century before Magellan. Also concealed was how the Chinese colonized America before the Europeans and transplanted in America and other countries the principal economic crops that have fed and clothed the world.

Unveiling incontrovertible evidence of these astonishing voyages, "1421" rewrites our understanding of history. Our knowledge of world exploration as it has been commonly accepted for centuries must now be reconceived due to this landmark work of historical investigation.

This feature require that you enable JavaScript in your browser.
END_OF_DOCUMENT_TOKEN_TO_BE_REPLACED

This feature require that you enable JavaScript in your browser.
END_OF_DOCUMENT_TOKEN_TO_BE_REPLACED

This feature require that you enable JavaScript in your browser.
END_OF_DOCUMENT_TOKEN_TO_BE_REPLACED