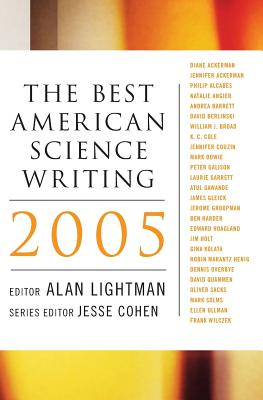 By Alan Lightman, Jesse Cohen
$13.95
Special Order - may be out of print
(This is a special order book which cannot be returned.)

Together these twenty-seven articles on a wide range of today's most current topics in science, from Oliver Sacks, James Gleick, Atul Gawande, and Natalie Angier, among others, represent the full spectrum of scientific writing, proving once again that "good science writing is evidently plentiful" (Scientific American).

Alan Lightman is a novelist, essayist, physicist, and educator. He is adjunct professor of humanities at the Massachusetts Institute of Technology (MIT). His essays, short fiction, and reviews have appeared in several magazines. His research articles have appeared in many journals of physics and astrophysics. His novels include Einstein's Dreams, which has been translated into more than thirty languages, and The Diagnosis, which was a National Book Award finalist in Fiction in 2000.

Jesse Cohen is a writer and freelance editor. He lives in New York City.

This feature require that you enable JavaScript in your browser.
END_OF_DOCUMENT_TOKEN_TO_BE_REPLACED

This feature require that you enable JavaScript in your browser.
END_OF_DOCUMENT_TOKEN_TO_BE_REPLACED

This feature require that you enable JavaScript in your browser.
END_OF_DOCUMENT_TOKEN_TO_BE_REPLACED