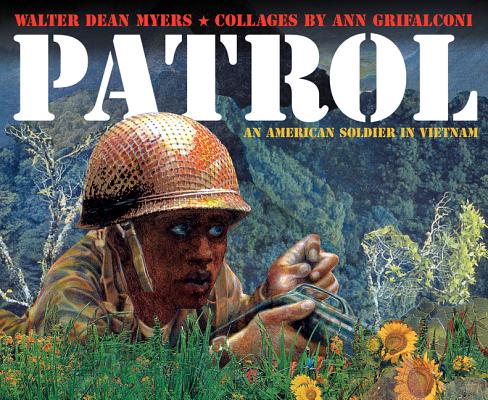 In a gripping and powerful story-poem, award-winning author Walter Dean Myers takes readers into the heart and mind of a young soldier in an alien land who comes face-to-face with the enemy. Strikingly illustrated with evocative and emotionally wrenching collages by Caldecott Honor artist Ann Grifalconi, this unforgettable portrait captures one American G.L's haunting experience.

Walter Dean Myers joined the army on his seventeeth birthday, at the onset of American involvement in Vietnam, but it was the death of his brother in 1968 that forever changed his mind about war.

A young American soldier waits for his enemy, rifle in hand, finger on the trigger. He is afraid to move and yet afraid not to move. Gunshots crackle in the still air. The soldier fires blindly into the distant trees at an unseen enemy. He crouches and waits -- heart pounding, tense and trembling, biting back tears. When will it all be over?

Walter Dean Myers was the New York Times bestselling author of Monster, the winner of the first Michael L. Printz Award; a former National Ambassador for Young People's Literature; and an inaugural NYC Literary Honoree. Myers received every single major award in the field of children's literature. He was the author of two Newbery Honor Books and six Coretta Scott King Awardees. He was the recipient of the Margaret A. Edwards Award for lifetime achievement in writing for young adults, a three-time National Book Award Finalist, as well as the first-ever recipient of the Coretta Scott King-Virginia Hamilton Award for Lifetime Achievement.

Ann Grifalconi illustrated patrol: An American Soldier in Vietnam by Walter Dean Myers, winner of the Jane Addams Children's Book Award. She is the author-illustrator of the Caldecott Honor book The Village of Round and Square Houses and Tiny's Hat. Ms. Grifalconi lives in New York City.

This feature require that you enable JavaScript in your browser.
END_OF_DOCUMENT_TOKEN_TO_BE_REPLACED

This feature require that you enable JavaScript in your browser.
END_OF_DOCUMENT_TOKEN_TO_BE_REPLACED

This feature require that you enable JavaScript in your browser.
END_OF_DOCUMENT_TOKEN_TO_BE_REPLACED