Rebirth of a Nation: The Making of Modern America, 1877-1920 (American History) (Paperback) 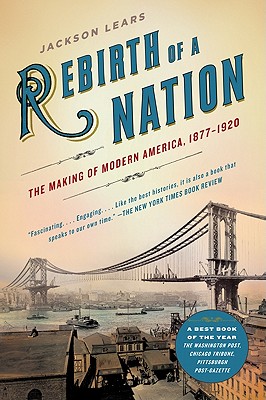 "Fascinating.... A major work by a leading historian at the top of his game—at once engaging and tightly argued." —The New York Times Book Review

“Dazzling cultural history: smart, provocative, and gripping. It is also a book for our times, historically grounded, hopeful, and filled with humane, just, and peaceful possibilities.” —The Washington Post

An illuminating and authoritative history of America in the years between the Civil War and World War I, Jackson Lears’s Rebirth of a Nation was named one of the best books of 2009 by The Washington Post, The Chicago Tribune, and The Pittsburgh Post-Gazette.

Jackson Lears is Board of Governors Professor of History at Rutgers University and the editor of Raritan: A Quarterly Review. The author of Fables of Abundance (winner of the Los Angeles Times Book Prize for history), Something for Nothing, and No Place of Grace, Lears writes for The New York Times, The Washington Post, and The New Republic. He lives in western New Jersey.

“A remarkable book. . . . As Jackson Lears demonstrates again, he is one of the best of his (and my) generation of historians.”
— David Nasaw, The American Prospect

“Jackson Lears is one of the few pre-eminent historians of our time. As we dream for a rebirth of America in the age of Obama, this magnificent and magisterial book on the making of modern America could not be more timely. Don’t miss it!”
— Cornel West

“In Rebirth of a Nation, Jackson Lears, our most stimulating historian of American culture, outdoes himself, offering a stunning interpretive synthesis on politics, culture, and social upheaval in the pivotal half-century when ideals of regeneration assumed their modern shape, sometimes as imperial bombast, sometimes as designs for reform.”
— Todd Gitlin

“High-concept cultural history at its provocative best. Lears is a polymath and Big Thinker.”
— American History

“A fascinating cultural history. . . .A major work by a leading historian at the top of his game—at once engaging and tightly argued. Like the best histories, it is also a book that speaks to our own time.”
— The New York Times Book Review

“Jackson Lears is a formidable, compellingly original cultural and intellectual historian. . . . Rebirth of a Nation is Lears’ most ambitious work yet, and it builds brilliantly on his earlier projects. . . . Lears’ convincing new narrative of this pivotal half century never falters.”
— Tim Rutten, The Los Angeles Times

“Jackson Lears, America’s premier cultural historian, has written the smartest and most illuminating survey of this roaring, perplexing era since Richard Hofstadter’s The Age of Reform.”
— Michael Kazin, author of A Godly Hero: The Life of William Jennings Bryan and professor of history, Georgetown University

“Jackson Lears has become the historian of American yearning. . . . He excels at the miniature portrait, and his richly associative imagination enables him to make telling use of the Cecil B. De Mille-sized case he assembled for Rebirth of a Nation.”
— Patricia O'Toole, The American Scholar

“In this sweeping and charged history, Jackson Lears brilliantly evokes a defining era in American history. He recasts what we have blandly called the ‘Gilded Age,’ revealing a time of profound change, sharp conflict, and enduring consequence.”
— Edward L. Ayers, University of Richmond

This feature require that you enable JavaScript in your browser.
END_OF_DOCUMENT_TOKEN_TO_BE_REPLACED

This feature require that you enable JavaScript in your browser.
END_OF_DOCUMENT_TOKEN_TO_BE_REPLACED

This feature require that you enable JavaScript in your browser.
END_OF_DOCUMENT_TOKEN_TO_BE_REPLACED