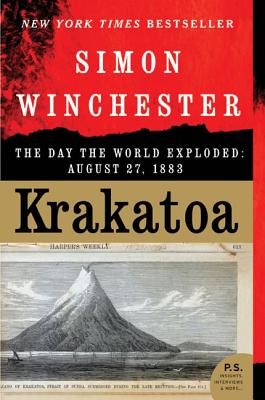 The bestselling author of The Professor and the Madman and The Map That Changed the World examines the enduring and world-changing effects of the catastrophic eruption off the coast of Java of the earth's most dangerous volcano -- Krakatoa.

The legendary annihilation in 1883 of the volcano-island of Krakatoa -- the name has since become a byword for a cataclysmic disaster -- was followed by an immense tsunami that killed nearly forty thousand people. Beyond the purely physical horrors of an event that has only very recently been properly understood, the eruption changed the world in more ways than could possibly be imagined. Dust swirled round die planet for years, causing temperatures to plummet and sunsets to turn vivid with lurid and unsettling displays of light. The effects of the immense waves were felt as far away as France. Barometers in Bogotá and Washington, D.C., went haywire. Bodies were washed up in Zanzibar. The sound of the island's destruction was heard in Australia and India and on islands thousands of miles away. Most significant of all -- in view of today's new political climate -- the eruption helped to trigger in Java a wave of murderous anti-Western militancy among fundamentalist Muslims: one of the first outbreaks of Islamic-inspired killings anywhere.

Simon Winchester's long experience in the world wandering as well as his knowledge of history and geology give us an entirely new perspective on this fascinating and iconic event as he brings it telling back to life.

Simon Winchester is the acclaimed author of many books, including The Professor and the Madman, The Men Who United the States, The Map That Changed the World, The Man Who Loved China, A Crack in the Edge of the World, and Krakatoa, all of which were New York Times bestsellers and appeared on numerous best and notable lists. In 2006, Winchester was made an officer of the Order of the British Empire (OBE) by Her Majesty the Queen. He resides in western Massachusetts.

“Brilliant...One of the best books ever written about the history and significance of a natural disaster.” — New York Times

“Masterful build-up of literary and geological tension.” — The Economist

“A real-life story bigger than any Hollywood blockbuster.” — Entertainment Weekly

“Krakatoa is a pleasure from beginning to end.” — Boston Sunday Globe

This feature require that you enable JavaScript in your browser.
END_OF_DOCUMENT_TOKEN_TO_BE_REPLACED

This feature require that you enable JavaScript in your browser.
END_OF_DOCUMENT_TOKEN_TO_BE_REPLACED

This feature require that you enable JavaScript in your browser.
END_OF_DOCUMENT_TOKEN_TO_BE_REPLACED