The Map That Changed the World: William Smith and the Birth of Modern Geology (Paperback) 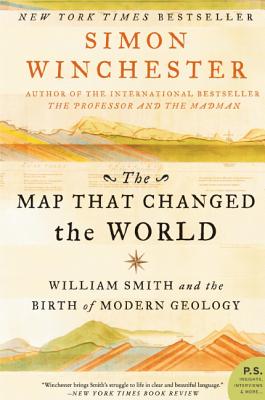 From the author of the bestselling The Professor and the Madman comes the fascinating story of William Smith, the orphaned son of an English country blacksmith, who became obsessed with creating the world's first geological map and ultimately became the father of modern geology.

In 1793 William Smith, a canal digger, made a startling discovery that was to turn the fledgling science of the history of the earth -- and a central plank of established Christian religion -- on its head. He noticed that the rocks he was excavating were arranged in layers; more important, he could see quite clearly that the fossils found in one layer were very different from those found in another. And out of that realization came an epiphany: that by following the fossils, one could trace layers of rocks as they dipped and rose and fell -- clear across England and, indeed, clear across the world. Determined to publish his discovery by creating a map that would display the hidden underside of England, he spent twenty years traveling the length and breadth of the kingdom by stagecoach and on foot, studying rock outcrops and fossils, piecing together the image of this unseen universe.

In 1815 he published his epochal beautiful hand-painted map, more than eight feet tall and six feet wide. But four years after its triumphant publication, and with his young wife going steadily mad to the point of nymphomania, Smith ended up in debtors' prison, a victim of plagiarism, swindled out of his recognition and his profits. He left London for the north of England and remained homeless for ten long years as he searched for work. It wasn't until 1831, when his employer, a sympathetic nobleman, brought him into contact with the Geological Society of London -- which had earlier denied him a fellowship -- that at last this quiet genius was showered with the honors long overdue him. He was summoned south to receive the society's highest award, and King William IV offered him a lifetime pension.

The Map That Changed the World is, at its foundation, a tale of endurance and achievement, of one man's dedication in the face of ruin and homelessness. The world's coal and oil industry, its gold mining, its highway systems, and its railroad routes were all derived entirely from the creation of Smith's first map.; and with a keen eye and thoughtful detail, Simon Winchester unfolds the poignant sacrifice behind this world-changing discovery.

Simon Winchester is the acclaimed author of many books, including The Professor and the Madman, The Men Who United the States, The Map That Changed the World, The Man Who Loved China, A Crack in the Edge of the World, and Krakatoa, all of which were New York Times bestsellers and appeared on numerous best and notable lists. In 2006, Winchester was made an officer of the Order of the British Empire (OBE) by Her Majesty the Queen. He resides in western Massachusetts.

"With descriptive contemporary visitations to places significant to the story and well-chosen historical detail, he makes immediate not only the magnitude and elegance of Smith's accomplishment, but also the thrill of each of the moments of genius necessary to reach his ultimate conclusion. Smith's life provides a terrific plot to frame his contribution to science. Winchester's wonderful account does credit to it." — Publishers Weekly (*Starred Review*)

"Winchester has once again captured the essence of persistence against odds resulting in achievement. His fascinating account will not disappoint." — Library Journal (starred review)

“Winchester brings Smith’s struggle to life in clear and beautiful language, the richness of which he continues to celebrate.” — New York Times Book Review

"Winchester has once again captured the essence of persistence against odds resulting in achievement." — Library Journal (starred review)

"Smith's life provides a terrific plot to frame his contribution to science. Winchester's wonderful account does credit to it." — Publishers Weekly (*Starred Review*)

“a marvellous book ” — The Independent (London)

This feature require that you enable JavaScript in your browser.
END_OF_DOCUMENT_TOKEN_TO_BE_REPLACED

This feature require that you enable JavaScript in your browser.
END_OF_DOCUMENT_TOKEN_TO_BE_REPLACED

This feature require that you enable JavaScript in your browser.
END_OF_DOCUMENT_TOKEN_TO_BE_REPLACED