The Genius Files #3: You Only Die Twice (Paperback) 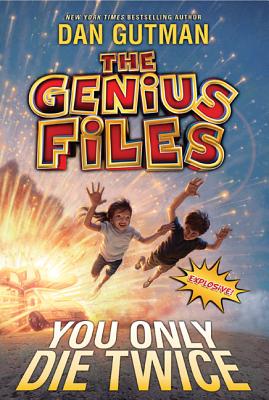 This is book number 3 in the Genius Files series.

The most exciting road trip in history continues! In this third book in the thrilling, New York Times bestselling adventure series, twelve-year-old twins Coke and Pepsi McDonald dodge nefarious villains all the way to Graceland.

The genius twins Coke and Pepsi have narrowly escaped a vat of a Spam, a pit of boiling fry oil, and a score of crazed adults all bent on killing them. But just when they thought they were safe, their arch nemesis Dr. Herman Warsaw reappeared, engaged to their Aunt Judy! Whoa—didn't he die already?! Now, as the twins continue their family road trip from Washington D.C. through the South, it will take every bit of their genius abilities to outwit their wacky enemies. It doesn't help that their parents remain totally oblivious! When they finally get to Graceland, Elvis's home in Memphis, Tennessee, Coke and Pepsi come to an explosive conclusion you'll have to read to believe!

With Dan Gutman’s laugh-out-loud humor and featuring photos and weird-but-true American tourist destinations like the National Jousting Hall of Fame, The Genius Files is a one-of-a-kind mix of geography and fun.

Don't miss the next action-packed book, The Genius Files #4: From Texas with Love!

This feature require that you enable JavaScript in your browser.
END_OF_DOCUMENT_TOKEN_TO_BE_REPLACED

This feature require that you enable JavaScript in your browser.
END_OF_DOCUMENT_TOKEN_TO_BE_REPLACED

This feature require that you enable JavaScript in your browser.
END_OF_DOCUMENT_TOKEN_TO_BE_REPLACED