A Bold and Dangerous Family: The Remarkable Story of an Italian Mother, Her Two Sons, and Their Fight Against Fascism (The Resistance Quartet #3) (Paperback) 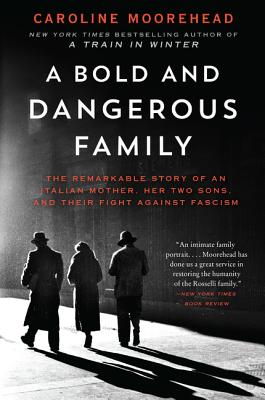 This is book number 3 in the The Resistance Quartet series.

Shortlisted for the Costa Award

Longlisted for the Baillie Gifford Prize

The acclaimed author of A Train in Winter and Village of Secrets delivers the next chapter in "The Resistance Quartet": the astonishing story of the aristocratic Italian family who stood up to Mussolini's fascism, and whose efforts helped define the path of Italy in the years between the World Wars—a profile in courage that remains relevant today.

Members of the cosmopolitan, cultural aristocracy of Florence at the beginning of the twentieth century, the Rosselli family, led by their fierce matriarch, Amelia, were vocal anti-fascists. As populist, right-wing nationalism swept across Europe after World War I, and Italy’s Prime Minister, Benito Mussolini, began consolidating his power, Amelia’s sons Carlo and Nello led the opposition, taking a public stand against Il Duce that few others in their elite class dared risk. When Mussolini established a terrifying and brutal police state controlled by his Blackshirts—the squaddristi—the Rossellis and their anti-fascist circle were transformed into active resisters.

In retaliation, many of the anti-fascists were arrested and imprisoned; others left the country to escape a similar fate. Tragically, Carlo and Nello were eventually assassinated by Mussolini’s secret service. After Italy entered World War II in June 1940, Amelia, thanks to visas arranged by First Lady Eleanor Roosevelt herself, fled to New York City with the remaining members of her family.

Renowned historian Caroline Moorehead paints an indelible picture of Italy in the first half of the twentieth century, offering an intimate account of the rise of Il Duce and his squaddristi; life in Mussolini’s penal colonies; the shocking ambivalence and complicity of many prominent Italian families seduced by Mussolini’s promises; and the bold, fractured resistance movement whose associates sacrificed their lives to fight fascism. In A Bold and Dangerous Family, Moorehead once again pays tribute to heroes who fought to uphold our humanity during one of history’s darkest chapters.

“Offers a neat capsule history of Italy in the first half of the century, particularly Mussolini’s rise to power…. Hit[s] home… in its inescapable parallels to our current situation. Ms. Moorehead never makes the point explicitly, and she doesn’t have to.” — Wall Street Journal

“An intimate family portrait…. Moorehead has done us a great service in restoring the humanity of the Rosselli family…. It’s the most complete portrait we have in English of this extraordinary family fighting—each in his or her own way—the most pernicious ideology of the last century.” — New York Times Book Review

“This account of a patriotic Italian-Jewish family at the forefront of the resistance to Mussolini’s regime follows the brothers.... But the center of the book is their mother, Amelia, a prominent playwright and feminist to whom they wrote frequently. Moorehead draws extensively on their letters, giving the reader an intimate sense of the everyday depredations of life under Fascism.” — New Yorker

“Much has been written about life under fascist rule.... But the study of a nation can never be as emotionally compelling as the study of a family. Expertly alternating vivid domestic detail with lucid exposition of the gradual evolution of totalitarianism, Caroline Moorehead allows her readers not only to know, but also to feel, how it was to endure fascist oppression.”
— Guardian

“An extremely personal and engaging story about the price one family paid for its political resistance.... A must-read.” — Library Journal, starred review

“Moorehead, a distinguished biographer and historian, tells the story of the Rosselli brothers and their mother Amelia, a playwright, with sensitivity, erudition, and balance.... A fine tribute.” —  Financial Times

“Moorehead recounts a story that deserves to be better known, exploiting her remarkable understanding of the nation and its culture.” — Max Hastings, London Sunday Times

“A haunting reminder of the fragility of liberty and the dangers of complaisance.” — Times (London)

“Shines light on the Rosselli family… to illuminate the treacherous and contradictory nature of life in Il Duce’s Italy…. As well versed in Italian socialism as she is in spy-novel tropes, Moorehead combines intellectual rigor with immersive storytelling that will appeal to specialists and casual readers alike.” — Publishers Weekly

“An absorbing, well-documented narrative…. A vivid portrait of resistance in dark, perilous times that is not without contemporary relevance.” — Kirkus

This feature require that you enable JavaScript in your browser.
END_OF_DOCUMENT_TOKEN_TO_BE_REPLACED

This feature require that you enable JavaScript in your browser.
END_OF_DOCUMENT_TOKEN_TO_BE_REPLACED

This feature require that you enable JavaScript in your browser.
END_OF_DOCUMENT_TOKEN_TO_BE_REPLACED