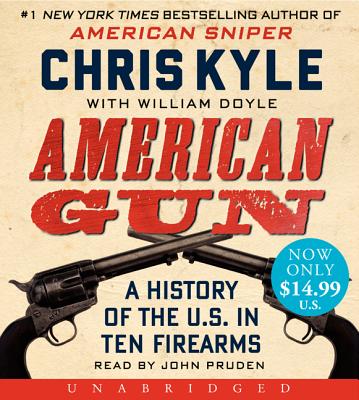 Featuring a foreword and afterword by Chris's wife, Taya Kyle, and illustrated with more than 100 photographs, this new paperback edition features a bonus chapter, “The Eleventh Gun,” on shotguns, derringers, and the Browning M2 machine gun.

SEAL Team 3 Chief Chris Kyle (1974–2013) was awarded two Silver Stars, five Bronze Stars with Valor, and numerous other citations. Following four combat tours in Iraq, he became chief instructor for training Naval Special Warfare sniper teams. He is the author of American Gun: A History of the U.S. in Ten Firearms. A native Texan, Kyle is survived by his wife, Taya, and their two children.

William Doyle has written or cowritten seven books, including PT 109: An American Epic of War, Survival, and the Destiny of John F. Kennedy and American Gun: A History of the U.S. in Ten Firearms (with “American Sniper” Chris Kyle). He served as director of original programming for HBO and was coproducer of the PBS special Navy SEALs: Their Untold Story. He lives with his family in New York City.

This feature require that you enable JavaScript in your browser.
END_OF_DOCUMENT_TOKEN_TO_BE_REPLACED

This feature require that you enable JavaScript in your browser.
END_OF_DOCUMENT_TOKEN_TO_BE_REPLACED

This feature require that you enable JavaScript in your browser.
END_OF_DOCUMENT_TOKEN_TO_BE_REPLACED