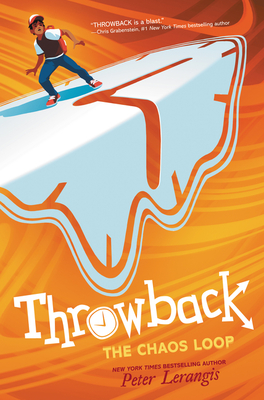 This is book number 2 in the Throwback series.

Peter Lerangis, the New York Times bestselling author of the Seven Wonders and Max Tilt series, returns with the second installment of his electrifying trilogy about a boy who discovers that he alone can alter the course of history.

Ever since Corey Fletcher found out that he’s the world’s first “throwback,” with the power to not only visit history, but change it, he’s been spending as much time in the past as possible. Corey loves using his skills to fix problems and help his friends and family. But as Corey becomes more and more addicted to rewriting history, he learns that time travel might change him in ways he may never be able to reverse.

Aware now that he can’t keep going into the past forever, Corey decides to use the trips he still has to change history in the most meaningful way he can imagine: by stopping Adolf Hitler. But when Corey travels back to World War II-era Germany, he quickly learns that the forces of history are strong and that it’s going to take a lot more than his good intentions to turn back the tides of evil—or even to survive them.

Get ready for time-warping adventure with a historical twist in the second book of the Throwback trilogy from New York Times bestselling author Peter Lerangis, whose books have sold over five and a half million copies worldwide.

"Throwback: Chaos Loop proves even more fun than the first book in the series, with more action, crazy antics, time-travel shenanigans, and a meaningful exploration of history." — Booklist

"Corey and Leila... are likable, genuine, and brave, just the kind of kids that readers would want to join on an adventure." — Bulletin of the Center for Children’s Books

This feature require that you enable JavaScript in your browser.
END_OF_DOCUMENT_TOKEN_TO_BE_REPLACED

This feature require that you enable JavaScript in your browser.
END_OF_DOCUMENT_TOKEN_TO_BE_REPLACED

This feature require that you enable JavaScript in your browser.
END_OF_DOCUMENT_TOKEN_TO_BE_REPLACED