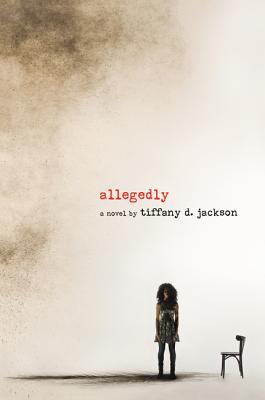 Orange Is the New Black meets Walter Dean Myer’s Monster in this gritty, twisty, and haunting debut by Tiffany D. Jackson about a girl convicted of murder seeking the truth while surviving life in a group home.

Mary B. Addison killed a baby.

Allegedly. She didn’t say much in that first interview with detectives, and the media filled in the only blanks that mattered: a white baby had died while under the care of a churchgoing black woman and her nine-year-old daughter. The public convicted Mary and the jury made it official. But did she do it?

There wasn’t a point to setting the record straight before, but now she’s got Ted—and their unborn child—to think about. When the state threatens to take her baby, Mary’s fate now lies in the hands of the one person she distrusts the most: her Momma. No one knows the real Momma. But does anyone know the real Mary?

Tiffany D. Jackson is the critically acclaimed author of Allegedly, Monday’s Not Coming, and Let Me Hear a Rhyme. A Walter Dean Myers Honor Book and Coretta Scott King–John Steptoe New Talent Award winner, she received her bachelor of arts in film from Howard University, earned her master of arts in media studies from the New School, and has over a decade in TV and film experience. The Brooklyn native still resides in the borough she loves. You can visit her at www.writeinbk.com.

★ “With remarkable skill, Jackson offers an unflinching portrayal of the raw social outcomes when youth are entrapped in a vicious cycle of nonparenting and are sent spiraling down the prison-for-profit pipeline. This dark, suspenseful exploration of justice and perception raises important questions teens will want to discuss.” — School Library Journal (starred review)

★ “The characters are complex, the situation unsettling, and the line between right and wrong hopelessly blurred. It’s also intensely relevant, addressing race, age, and mental illness within the criminal justice system. Well conceived and executed, this is an absorbing and exceptional first novel.” — Publishers Weekly (starred review)

★ “Suspenseful without being emotionally manipulative, compelling without resorting to shock value, this is a tightly spun debut that wrestles with many intense ideas and ends with a knife twist that will send readers racing back to the beginning again.” — Booklist (starred review)

“Seen through Jackson’s dark portrait of the legal system and the failures of parents and social workers, Mary’s environments are as grim as the stories that play out in them; readers fascinated by procedural dramas will be thoroughly hooked.” — Bulletin of the Center for Children’s Books

“I have to admit, it’s been a while since I’ve been this rattled by a story. Tiffany D. Jackson chips at the world, then cracks it, then shatters it into shards of discomfort and complexity for the reader to grapple with it. Allegedly, undoubtedly, will linger long after it’s over.” — Jason Reynolds, award-winning author of All American Boys and The Boy in the Black Suit

“A well-executed, powerful journey into the claustrophobic life of a young girl trying to navigate what little is left after the world has judged her, and what she will do to escape it.” — Mindy McGinnis, Edgar Award-winning author of A Madness So Discreet

“Tiffany Jackson’s timely and chilling debut will haunt you for a long time. An extraordinary new voice.” — Justine Larbalestier, author of Liar and My Sister Rosa

This feature require that you enable JavaScript in your browser.
END_OF_DOCUMENT_TOKEN_TO_BE_REPLACED

This feature require that you enable JavaScript in your browser.
END_OF_DOCUMENT_TOKEN_TO_BE_REPLACED

This feature require that you enable JavaScript in your browser.
END_OF_DOCUMENT_TOKEN_TO_BE_REPLACED