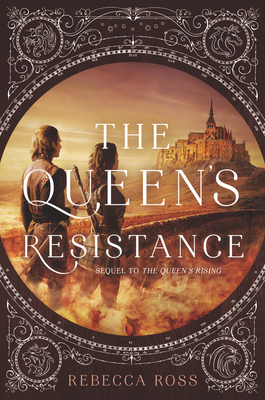 For fans of Red Queen and Grave Mercy comes the captivating sequel to the Renaissance France-inspired epic fantasy The Queen’s Rising.

Brienna is a mistress of knowledge and is beginning to settle into her role as the daughter of the once disgraced lord, Davin MacQuinn. Though she’d just survived a revolution that will return a queen to the throne, she faces yet another challenge: acceptance by the MacQuinns.

But as Queen Isolde Kavanagh’s closest confidant, she’ll have to balance serving her father’s House as well as her country.

Then there’s Aodhan Morgan, formerly known as Cartier Évariste, who is adjusting to the stark contrast between his pre-rebellion life in Valenia and his current one as lord of a fallen House. As he attempts to restore the Morgane name, he let his mind wander—what if he doesn’t have to raise his House alone? What if Brienna could stand by his side?

But Brienna and Cartier must put their feelings aside, as there are more vital tasks at hand—the Lannons' trial, forging alliances, and ensuring that no one halts the queen’s coronation. Resistance is rumbling among the old regime’s supporters, who are desperate to find a weakness in the rebels’ forces.

And what makes one more vulnerable than love?

Rebecca Ross writes fantasy novels for teens and adults. She lives in the Appalachian foothills of Northeast Georgia with her husband, a lively Australian Shepherd, and an endless pile of books. When not writing, she can be found reading or in her garden, where she grows wildflowers and story ideas. Find her on Instagram @beccajross.

“Rebecca Ross weaves a tale of hope, valor, and revenge of the most heart wrenching kind. The Queen’s Rising duology is unlike any other YA fantasy novel I’ve read and has been a story my heart had no idea it desperately needed to read.”   — Taylor Beach, Instagram Book Reviewer from @the_bookish_ballad

This feature require that you enable JavaScript in your browser.
END_OF_DOCUMENT_TOKEN_TO_BE_REPLACED

This feature require that you enable JavaScript in your browser.
END_OF_DOCUMENT_TOKEN_TO_BE_REPLACED

This feature require that you enable JavaScript in your browser.
END_OF_DOCUMENT_TOKEN_TO_BE_REPLACED