The Women in the Castle: A Novel (Paperback) 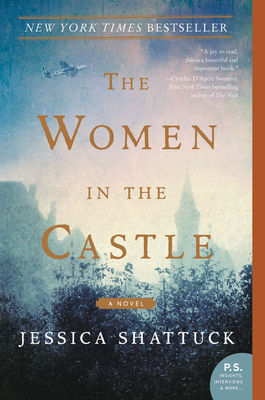 In this engaging novel with rich period details, three war widows and their children help each other survive at the end of WWII. Their husbands died as members of the resistance; aside from that common thread, Marianne, Benita, and Ania bring very varied backgrounds to their makeshift home in the castle's kitchen. They also bring lingering repercussions from past choices and current secrets. Jessica Shattuck brings us into that world, and shows us that the rules for love and loyalty are different in wartime.

“To a Bavarian palace, worn and collapsing like the rest of Germany at the end of the Second World War, a widow returns to honor a promise. Secrets, sacrifices, and the struggle to survive all make for a highly provocative read. Shattuck’s poignant and powerful story about these women and their children, thrown together by war and its aftermath, gave me a renewed respect and empathy for their contemporary counterparts caught in the conflict around today’s world. The first thing I wanted to do after finishing this book was talk about it!”
— Vivien Jennings, Rainy Day Books, Fairway, KS

"Mesmerizing . . . The Women in the Castle stands tall among the literature that reveals new truths about one of history’s most tragic eras."—USA Today

Three women, haunted by the past and the secrets they hold

Set at the end of World War II, in a crumbling Bavarian castle that once played host to all of German high society, a powerful and propulsive story of three widows whose lives and fates become intertwined—an affecting, shocking, and ultimately redemptive novel from the author of the New York Times Notable Book The Hazards of Good Breeding.

Amid the ashes of Nazi Germany’s defeat, Marianne von Lingenfels returns to the once-grand castle of her husband’s ancestors, an imposing stone fortress now fallen into ruin following years of war. The widow of a resister murdered in the failed July 20, 1944, plot to assassinate Adolf Hitler, Marianne plans to uphold the promise she made to her husband’s brave conspirators: to find and protect their wives, her fellow resistance widows.

First Marianne rescues six-year-old Martin, the son of her dearest childhood friend, from a Nazi reeducation home. Together, they make their way across the smoldering wreckage of their homeland to Berlin, where Martin’s mother, the beautiful and naive Benita, has fallen into the hands of occupying Red Army soldiers. Then she locates Ania, another resister’s wife, and her two boys, now refugees languishing in one of the many camps that house the millions displaced by the war.

As Marianne assembles this makeshift family from the ruins of her husband’s resistance movement, she is certain their shared pain and circumstances will hold them together. But she quickly discovers that the black-and-white, highly principled world of her privileged past has become infinitely more complicated, filled with secrets and dark passions that threaten to tear them apart. Eventually, all three women must come to terms with the choices that have defined their lives before, during, and after the war—each with their own unique share of challenges.

Written with the devastating emotional power of The Nightingale, Sarah’s Key, and The Light Between Oceans, Jessica Shattuck’s evocative and utterly enthralling novel offers a fresh perspective on one of the most tumultuous periods in history. Combining piercing social insight and vivid historical atmosphere, The Women in the Castle is a dramatic yet nuanced portrait of war and its repercussions that explores what it means to survive, love, and, ultimately, to forgive in the wake of unimaginable hardship.

Jessica Shattuck is the New York Times bestselling author of The Women in the Castle, The Hazards of Good Breeding, a New York Times Notable Book and finalist for the PEN/Winship Award, and Perfect Life. Her writing has appeared in the New York Times, The New Yorker, Glamour, Mother Jones, and Wired, among other publications.

“If you love historical fiction, this is your must-read book: It’s captivating, fascinating, and incredibly faithful to the events as they happened, and Jessica Shattuck reveals an entirely new side of what it’s like to be a woman in wartime.” — Newsweek

“Moving . . . Shattuck’s achievement—beyond unfolding a plot that surprises and devastates—is in her subtle exploration of what a moral righteousness looks like in the aftermath of the war, when communities and lives must be rebuilt, together.” — New York Times Book Review

“Offers a mesmerizing new look at the aftermath of the war . . . with insight and empathy, The Women in the Castle stands tall among the literature that reveals new truths about one of history’s most tragic eras.” — USA Today

“If you’re a historical fiction fan, this will be your new favorite novel of 2017. It’s so emotionally powerful there’s a chance the literary-induced chills will stay with you well into summer.” — Redbook Magazine, 20 Books By Women You Must Read This Spring

“Fans of The Nightingale and other classic World War II stories will fall in love with this compelling new perspective on women at war.” — Helen Simonson, New York Times bestselling author of The Summer Before the War and Major Pettigrew's Last Stand

“Riveting and emotional, The Women in the Castle is a WWII story like you’ve never seen before.” — Bustle

“For your friend who loves a good war drama. About a woman who plays castle with other war widows across Germany post WWII.” — The Skimm

“A virtuoso of time and place, Jessica Shattuck has created a heart-smashingly good story that will change the way you look at current events, and leave you asking, ‘What would I do if I were in these characters’ shoes?’ Powerful and prescient, an important book everyone should read.” — Jamie Ford, New York Times bestselling author of Hotel on the Corner of Bitter and Sweet and Songs of Willow Frost

“A vivid and gripping tale of endurance in the wake of World War II. . . . The writing is magnificent, as is Shattuck’s ability to render unimaginable circumstances with tremendous clarity and compassion. A joy to read, this is a beautiful and important book.” — Cynthia D'Aprix Sweeney, New York Times bestselling author of The Nest

“I couldn’t put Jessica Shattuck’s gorgeous novel down, an intricate and intimate portrait of the lives of three women whose fates draw them together in WWII Germany. A wonderful, wonderful read.” — Janice Y.K. Lee, New York Times bestselling author of The Piano Teacher and The Expatriates

“Vivid and beautifully written . . . With extraordinary skill, knowledge, and insight, Jessica Shattuck transports us to Germany in the aftermath of World War II and into the lives of three powerfully drawn and memorable women. Compelling and very satisfying.” — Jill McCorkle, New York Times bestselling author of Life After Life

“The reader is fully immersed in the experiences of these women, the choices they make, and the burdens they carry. . . . a rich, potent, fluently written tale of endurance and survival.” — Booklist (starred review)

This feature require that you enable JavaScript in your browser.
END_OF_DOCUMENT_TOKEN_TO_BE_REPLACED

This feature require that you enable JavaScript in your browser.
END_OF_DOCUMENT_TOKEN_TO_BE_REPLACED

This feature require that you enable JavaScript in your browser.
END_OF_DOCUMENT_TOKEN_TO_BE_REPLACED