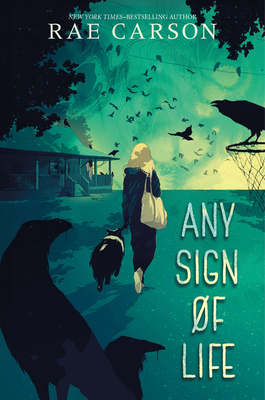 “Any Sign of Life is a heartbreaking story filled with courage, friendship, and personality. Paige Miller is the perfect team-up buddy in an apocalypse. I was with her when she lost everything, and stood right next to her when she took it all back.”—Wesley Chu, #1 New York Times–bestselling author of the War Arts Saga

When a teenage girl thinks she may be the only person left alive in her town—maybe in the whole world—she must rely on hope, trust, and her own resilience. A harrowing and pulse-pounding survival story from New York Times–bestselling author Rae Carson. Any Sign of Life is a must-have for readers of Rick Yancey’s The 5th Wave and Neal Shusterman and Jarrod Shusterman’s Dry.

Paige Miller is determined to take her basketball team to the state championship, maybe even beyond. But as March Madness heats up, Paige falls deathly ill. Days later, she wakes up attached to an IV and learns that the whole world has perished. Everyone she loves, and all of her dreams for the future—they’re gone.

But Paige is a warrior. She pushes through her fear and her grief and gets through each day scrounging for food, for shelter, for safety. As she struggles with her new reality, Paige learns that the apocalypse did not happen by accident. And that there are worse things than being alone.

New York Times–bestselling author Rae Carson tells a contemporary and all-too-realistic story about surviving against the odds in this near-future thriller. Any Sign of Life will electrify fans of Rory Power’s Wilder Girls and Emily St. John Mandel’s Station Eleven.

Rae Carson is the author of two bestselling and award-winning trilogies, as well as the acclaimed stand-alone novels Any Sign of Life and The Empire of Dreams. Her debut, The Girl of Fire and Thorns, was named a William C. Morris Award finalist and an Andre Norton Award finalist. Walk on Earth a Stranger was longlisted for the 2015 National Book Award and won the Western Writers of America Spur Award. Her books tend to contain adventure, magic, and smart girls who make (mostly) smart choices. Originally from California, Rae Carson now lives in Ohio with her husband. www.raecarson.com

“Any Sign of Life is a heartbreaking story filled with courage, friendship, and personality. Paige Miller is the perfect team-up buddy in an apocalypse. I was with her when she lost everything, and stood right next to her when she took it all back.” — Wesley Chu, #1 New York Times–bestselling author of the War Arts Saga

"The mechanics of coping bloom into much more in this deeply humanizing near-future survival thriller . . . Basketball player Paige Miller, 17, barely remembers getting sick. But when she wakes up emaciated from a six-day flu, she finds a grim scene: carrion birds, power outages, and her family dead in a world gone silent . . . Carson tempers a grim, death-laced future with pragmatism, an athlete’s awareness of bodily limits, and an uplifting belief in people’s capacity for good. Fans of Megan Crewe and Susan Beth Pfeffer will relish this timely update to classic postapocalyptic YA.” — Publishers Weekly (starred review)

“High school senior and WNBA hopeful Paige wakes up from a coma to find herself the only living person in her Columbus, Ohio, neighborhood. . . . [A] smart, suspenseful thriller. . . . Paige’s tenacity is appealing, and her relatable first-person narration shines when observing tiny details of her surroundings and matter-of-factly processing topics like privilege, menstruation, and reproductive rights. . . . Totally un-put-down-able.” — Kirkus Reviews

“Carson steeps her writing in the physicality of bodies and societies breaking down . . . [Any Sign of Life] mines the very real fears seeded by COVID for tension . . . [and] it’s almost a relief, then, when the plot takes a marked turn into science fiction and focuses on the adrenaline rush of surviving a direct violent attack and not an insidious pathogen. While the immediate threat is eventually vanquished, there’s no guarantee of long-term safety, a disquieting situation readers may recognize.”  — Bulletin of the Center for Children’s Books

"As soon as Paige Miller wakes with a pulsing headache and parched mouth, she knows something's wrong. . . . Eventually, Paige comes across other survivors, Trey and Tanq, and they follow a lead to Sandusky for answers. The truth, however, about why they survived, where the virus came from, and what the future holds may not be something they're ready for. Carson has created a terrifying postapocalyptic world marred by the scent of rotting flesh and a threatening new entity. . . . Stories such as this are sure to have readers thinking about their own purposes, impacts, and legacies.” — Booklist

“Ohio high school senior Paige wakes up from what she thought was just a bout of flu to discover that the sickness she has lived through seems to have killed off everyone else. . . . Carson delivers a solid end-of-the-world thriller full of vivid imagery and strong emotions. . . . Small details . . . and a clear sense of place bring the story to life. Identity issues are naturally incorporated into the narrative, showing that race and sexuality . . . still matter even as humanity is struggling to survive.” — Horn Book Magazine

“Carson has crafted an apocalypse so real it could happen tomorrow . . . With high stakes and a fast-paced survival plot line, sharp prose carries the novel . . . Vivid and well-crafted.” — School Library Journal

This feature require that you enable JavaScript in your browser.
END_OF_DOCUMENT_TOKEN_TO_BE_REPLACED

This feature require that you enable JavaScript in your browser.
END_OF_DOCUMENT_TOKEN_TO_BE_REPLACED

This feature require that you enable JavaScript in your browser.
END_OF_DOCUMENT_TOKEN_TO_BE_REPLACED