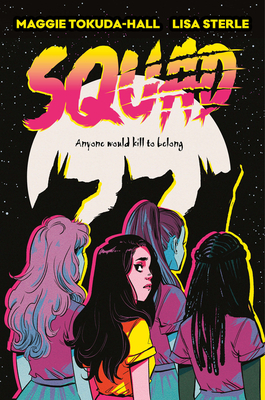 “Squad tackles friendship, toxic masculinity, and growing up, while building a mythology around werewolves that feels new and fresh. The colors pop as the story ebbs and flows, leaving you unable to put it down until you have consumed the whole thing!”
— Abby Bennsky, Old Town Books, Alexandria, VA

“Squad is a fast-paced and feminist horror story for every girl who’s ever felt like prey, and asks how far a girl should go to hunt the hunters.”—Laura Ruby, author of National Book Award Finalist Thirteen Doorways, Wolves Behind Them All

“Squad is a story fitted with the sharpest teeth that chomps down on the patriarchy, and I adored it with my entire vicious heart."—Chloe Gong, author of New York Times–bestselling These Violent Delights

Pretty Little Liars meets Teen Wolf in this sharply funny, and patriarchy-smashing graphic novel from author Maggie Tokuda-Hall and artist Lisa Sterle. When the new girl is invited to join her high school’s most popular clique, she can’t believe her luck—and she can’t believe their secret, either.

When Becca transfers to a high school in an elite San Francisco suburb, she’s worried she’s not going to fit in. To her surprise, she’s immediately adopted by the most popular girls in school. At first glance, Marley, Arianna, and Mandy are perfect. But at a party under a full moon, Becca learns that they also have a big secret.

Becca’s new friends are werewolves. Their prey? Slimy boys who take advantage of unsuspecting girls. Eager to be accepted, Becca allows her friends to turn her into a werewolf, and finally, for the first time in her life, she feels like she truly belongs.

But then things get complicated. As their pack begins to buckle under the pressure, their moral high ground gets muddier and muddier—and Becca realizes that she might have feelings for one of her new best friends.

Lisa Sterle’s stylish illustrations paired with Maggie Tokuda-Hall’s sharp writing make Squad a fierce, haunting, and fast-paced thriller that will resonate with fans of Riverdale, and with readers of This Savage Song, Lumberjanes, and Paper Girls.

“Squad is monstrously delightful and delightfully monstrous. This book is transformative, healing, and deeply powerful.” — Sarah Gailey, author of When We Were Magic

"A story you can't help but sink your teeth into. Twists and turns you never see coming. I devoured this book." — Colleen AF Venable, author of National Book Award nominee Kiss Number 8

“People call them all kinds of names—creeps, jerks. But the right word is predator. And that’s who we hunt. Becca wants what every high-schooler does: to have a group of friends, a squad. But Becca’s new friends are more than a clique, they’re a pack, and this pack is hungry. Squad is a fast-paced and feminist horror story for every girl who’s ever felt like prey, and asks how far a girl should go to hunt the hunters.” — Laura Ruby, National Book Award Finalist and Printz Medalist

"If the words 'badass lady-werewolves' aren't enough to convince you to read this book, the luscious art and brilliantly complicated portrayals of female friendship will. Squad will surprise, delight and horrify you. Get ready for this story to sink its teeth right into your heart."  — Mallory O'Meara, bestselling author of The Lady from the Black Lagoon

“A fast-paced and deeply satisfying read. Squad is a story fitted with the sharpest teeth that chomps down on the patriarchy, and I adored it with my entire vicious heart." — Chloe Gong, author of New York Times–bestselling These Violent Delights

“After she attends a party with the coolest girls in school, Becca realizes they’re not a squad—they’re more like a pack. . . . Author Maggie Tokuda-Hall upends many classic werewolf tropes in Squad . . . a revenge narrative and a quasi fable about consent . . . Illustrator Lisa Sterle’s bold, energetic artwork perfectly complements the novel’s themes of friendship, loyalty, betrayal and the possibility of love. . . . A story of dramatic contrasts and surprising transformations.” — BookPage (starred review)

“New student Becca can hardly believe her luck when Arianna, Marley, and Amanda, who sit at the top of the Piedmont High School hierarchy, pick her to join their exclusive friend group. . . . The story highlights important topics, including internalized misogyny and codependent friendships. . . . An exciting look at girl power gone wrong.” — Kirkus Reviews

“Becca’s first day as a junior at Piedmont High goes surprisingly well after golden girl Marley invites her to sit with the popular girls . . . but she doesn’t feel like one of the pack—until some creepster dude tries to assault her and the girls show up, turn into wolves, tear him to pieces, and invite Becca to become one of them. . . . This feminist vigilante tale is made especially entertaining by the graphic novel’s contrast of bubbly, Barbie-esque illustrations with nightmarish scenes of blood and guts . . . Perennially satisfying.”
— Bulletin of the Center for Children’s Books

“If the popular girls at a Bay Area high school seem overly eager to befriend smart, queer, Asian-cued Becca, they have a specific reason in mind: they’re werewolves in need of another packmate. . . . Literalizing pack mentality, Tokuda-Hall smoothly explores the complexities of so-called sisterhood. Sterle’s long, lean characters don neo-1980s and ’90s fashions in art that dovetails with the economical storytelling to create an intersectional examination of high school social dynamics that doesn’t shortchange readers on adventure.” — Publishers Weekly

“An outsider back in Los Angeles, Becca hopes to turn things around . . . and gets an unexpected invitation to join [Marley’s] clique. . . . She soon learns that this pack is literally that—Arianna, Amanda, and Marley are werewolves who feast on boys, but only those they believe are dangerous predators. . . . The story offers a fresh look at the cost of fitting in and how the line between predator and prey often blurs. Sterle’s artwork is strong, whether conveying the girls’ disdain or gruesomely illustrating the werewolves feasting. Her use of bright colors throughout adds intensity. . . . Using supernatural elements, this graphic novel deftly explores the cost of belonging.” — School Library Journal

“Cool-girl Marley invites new-girl Becca to join her clique, thus setting into motion a Heathersesque tale about a smart teen who discovers the darker cost of fitting in. . . . Female friendship sits front and center in this supernatural vigilante story, even when plans unravel. Readers who want thrilling carnage, sharp dialogue, and sapphic romance mixed into their teen dramas will devour this transformative tale.” — Booklist

This feature require that you enable JavaScript in your browser.
END_OF_DOCUMENT_TOKEN_TO_BE_REPLACED

This feature require that you enable JavaScript in your browser.
END_OF_DOCUMENT_TOKEN_TO_BE_REPLACED

This feature require that you enable JavaScript in your browser.
END_OF_DOCUMENT_TOKEN_TO_BE_REPLACED