The One and Only Bob (Paperback) 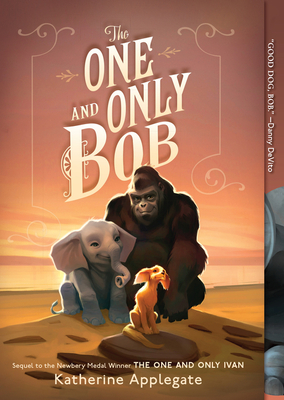 A #1 New York Times bestseller and a #1 Indie bestseller!

"Good dog Bob. Great to have a best friend.”—Danny DeVito

Return to the unforgettable world of the Newbery Medal-winning and #1 New York Times bestselling novel The One and Only Ivan in this incredible sequel, starring Ivan’s friend Bob! Catch up with these beloved friends before you see the star-studded film adaptation of The One and Only Ivan, now available on Disney+!

Bob sets out on a dangerous journey in search of his long-lost sister with the help of his two best friends, Ivan and Ruby. As a hurricane approaches and time is running out, Bob finds courage he never knew he had and learns the true meaning of friendship and family.

Bob, Ivan, and Ruby have touched the hearts of millions of readers, and their story isn’t over yet. Catch up with these beloved friends before the star-studded film adaptation of The One and Only Ivan hits theaters in August 2020!

One and Only Bob is an instant #1 New York Times bestseller, embraced by new and old fans of Katherine Applegate's beloved One and Only Ivan. Great for summer reading or anytime! A Today show pick for “25 children’s books your kids and teens won’t be able to put down this summer!"

In the tradition of timeless stories like Charlotte's Web and Stuart Little, Katherine Applegate blends humor and poignancy to create an unforgettable story of friendship, family, and hope.

The One and Only Bob features first-person narrative; author's use of literary devices (personification, imagery); and story elements (plot, character development, perspective).

This acclaimed middle grade novel is an excellent choice for tween readers in grades 5 to 8, for independent reading, homeschooling, and sharing in the classroom.

Katherine Applegate is the Newbery Medal-winning and #1 New York Times bestselling author of numerous books for young readers, including The One and Only Ivan, The One and Only Bob, Crenshaw, Wishtree, the Roscoe Riley Rules chapter books series, and the Animorphs series. She lives with her husband, who writes as the author Michael Grant, and their children in California.

"Bob proves to everyone (and finally himself) that there is a big heart in that tiny chest…and a brave one too. Applegate picks up where her Newbery Medal winner left off, and fans will be overjoyed to ride along in the head of lovable, self-deprecating Bob on his storm-tossed adventure. His wry doggy observations and attitude are pitch perfect." — Kirkus Reviews (starred review)

"Ricocheting between entertainment and poignancy, the dog’s musings on his past and present give way to an urgent chronicle of survival. Applegate deepens the suspense (while, ingeniously, amplifying the humor) with the appearance of Bob’s long-lost sister. The novel’s fluid meshing of loyalty, forgiveness, and trust will leave readers hoping that the author has more one-and-only stories to tell." — Publishers Weekly (starred review)

"In this story of true friendship, hope, and courage, Bob learns to appreciate and cherish those he loves. Driven by favorite characters from The One and Only Ivan, Bob’s story is delightfully heartfelt and adventurous. Castelao’s illustrations add additional beauty to the story. Readers will be lining up to read this sequel." — School Library Journal (starred review)

"Bob supplies a sharp, lively voice that young readers will enjoy. Fans of the first book will love catching up with cherished friends, and newcomers, too, will enjoy this heartfelt story of survival." — Booklist

"Much like Bob himself, this book has an appealing mix of frenetic energy and somber contemplation. Commentary on animal welfare and climate change is carefully woven into the narrative, giving readers food for thought but never overwhelming what is ultimately a tale of friendship and forgiveness." — Bulletin of the Center for Children’s Books

"Applegate writes that she was delighted when she heard DeVito would be the voice of Bob in the upcoming film adaptation of Ivan, and we agree: DeVito's voice is Bob’s. This is a heartfelt and entertaining listen." — Booklist (starred review of audio edition)

This feature require that you enable JavaScript in your browser.
END_OF_DOCUMENT_TOKEN_TO_BE_REPLACED

This feature require that you enable JavaScript in your browser.
END_OF_DOCUMENT_TOKEN_TO_BE_REPLACED

This feature require that you enable JavaScript in your browser.
END_OF_DOCUMENT_TOKEN_TO_BE_REPLACED