A Comb of Wishes (Hardcover) 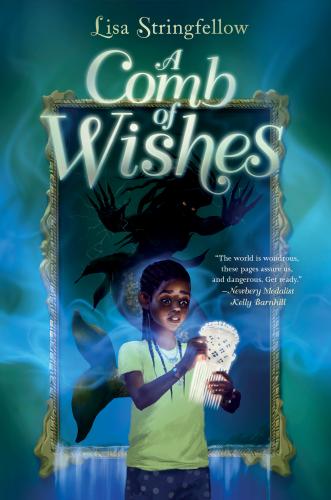 “A wonderfully told tale of family, friendship, grief, and longing. When a powerful mermaid is determined to reclaim what is rightfully hers, Kela discovers what really happens when you get the one thing you most want in the world.”
— Susan Williams, M. Judson Booksellers & Storytellers, Greenville, SC

Ever since her mother’s death, Kela feels every bit as broken as the shards of glass, known as “mermaid’s tears,” that sparkle on the Caribbean beaches of St. Rita. So when Kela and her friend Lissy stumble across an ancient-looking comb in a coral cave, with all she’s already lost, Kela can’t help but bring home her very own found treasure.

Far away, deep in the cold ocean, the mermaid Ophidia can feel that her comb has been taken. And despite her hatred of all humans, her magic requires that she make a bargain: the comb in exchange for a wish.

But what Kela wants most is for her mother to be alive. And a wish that big will exact an even bigger price…

Don’t miss the novel that Newbery-winning author Kelly Barnhill calls “one of the most promising works of fiction in a long time”!

Lisa Stringfellow received the inaugural Kweli Color of Children’s Literature Manuscript Award in 2019 for A Comb of Wishes. She is a middle school teacher and lives in Boston, Massachusetts, with her children and two bossy cats.

“Imbued with a magic that felt as real as the concrete and beloved world in which it is set, this story moves with a plot that is both surefooted and wild, both inexorable and surprising, both cerebral and emotional. I loved it so much.” — Kelly Barnhill, author of the Newbery-winning novel The Girl Who Drank the Moon

“Captivating and creative, magical and moving, this enchanting tale about grief and abiding love will hold you spellbound. What a joy and honor to welcome this brilliant new voice, as beautiful as the ocean and as bright as a mermaid’s tears.” — Padma Venkatraman, Walter Award winning author of The Bridge Home

"Stringfellow weaves an enchanting tale of loss, longing, and discovery infused with Caribbean folklore. Readers will be captivated by Kela’s story and become invested in her journey as she tries to deal with the grief of losing her mother as well as regret for her past actions." — Kirkus Reviews

"Kela’s primary narration allows for a harmonious blend of contemporary island life and Afro-Caribbean lore, while chapters focusing on Ophidia draw on elements of Andersen’s “The Little Mermaid.” The third-person narration of the interspersed sections echoes a rhythmic traditional call-and-response that links the teller and the listener." — Bulletin of the Center for Children’s Books

"Stringfellow’s middle-grade debut is a wondrous and original story that incorporates Caribbean culture and folklore. Told in alternating points of views between Kela and Ophidia, the novel leads us through a story about family that spans hundreds of years and will captivate readers until the end." — Booklist

"A unique blend of Caribbean folklore and realistic grief with a vindictive mermaid twist. Hand to fans of mermaid tales, general fantasy lovers, and readers ­seeking a rare gem in the genre." — School Library Journal

"The story is imbued with magic, but Stringfellow’s powerful writing makes the fantastical feel like reality. Through narrative perspectives centering both Kela and Ophidia, the author recalls the call-and-response structure prevalent in Black storytelling traditions. Fans of Baptiste’s The Jumbies and Rhodes’s Bayou Magic will enjoy spending time with Kela as she navigates a journey filled with grief, love, loss, and discovery." — Horn Book Magazine

"Stringfellow brings a fantastical approach to one character’s processing of grief as, with the support of secondary characters, Kela begins to truly navigate her pain while unearthing the stories and lore that are her heritage." — Publishers Weekly

This feature require that you enable JavaScript in your browser.
END_OF_DOCUMENT_TOKEN_TO_BE_REPLACED

This feature require that you enable JavaScript in your browser.
END_OF_DOCUMENT_TOKEN_TO_BE_REPLACED

This feature require that you enable JavaScript in your browser.
END_OF_DOCUMENT_TOKEN_TO_BE_REPLACED