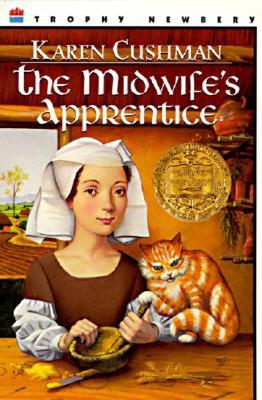 'Like Cushman's 1995 Newbery Honor Book, Catherine, Called Birdy, this novel is about a strong young woman in medieval England who finds her own way home. This is a world, like Chaucer's, that's . . . dangerous, primitive and raucous. From the first page you're caught by the spirit of the homeless, nameless waif, somewhere around 12 years old. She gets the village midwife to take her in, befriends a cat, names herself Alyce, and learns something about delivering babies. When she fails, she runs away, but she picks herself up again and returns to work and independence.' --ALA Booklist (starred review). '. . .A fascinating view of a far distant time.' -- The Horn Book (starred review)

This feature require that you enable JavaScript in your browser.
END_OF_DOCUMENT_TOKEN_TO_BE_REPLACED

This feature require that you enable JavaScript in your browser.
END_OF_DOCUMENT_TOKEN_TO_BE_REPLACED

This feature require that you enable JavaScript in your browser.
END_OF_DOCUMENT_TOKEN_TO_BE_REPLACED