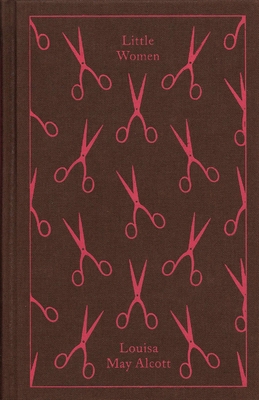 Part of Penguin's beautiful hardback Clothbound Classics series, designed by the award-winning Coralie Bickford-Smith, these delectable and collectible editions are bound in high-quality colourful, tactile cloth with foil stamped into the design. Meg, Jo, Amy and Beth - four "little women" enduring hardships and enjoying adventures in Civil War New England The charming story of the March sisters, Little Women has been adored by generations. Readers have rooted for Laurie in his pursuit of Jo's hand, cried over little Beth's death, and dreamed of traveling through Europe with old Aunt March and Amy. Future writers have found inspiration in Jo's devotion to her writing. In this simple, enthralling tale, both parts of which are included here, Louisa May Alcott has created four of American literature's most beloved women.

Louisa May Alcott wrote her first novel, The Inheritance, at age seventeen, but it went unpublished for nearly 150 years until 1997, after two researchers (Joel Myerson and Daniel Shealy) stumbled across the handwritten manuscript in the Houghton Library at Harvard University. Of course, Ms. Alcott is best known for a different novel, Little Women, which she wrote in two parts. The first volume, alternately titled Meg, Jo, Beth, and Amy, was published in 1868, and the second volume, Good Wives, was published in 1869. Like Jo in Little Women, Louisa also wrote many "blood and thunder" tales, which were published in popular periodicals of the day. She did not openly claim authorship for many of these Gothic thriller stories, however: for some, she used the pseudonym, "A. M. Barnard"; for others, she chose to remain completely anonymous.

This feature require that you enable JavaScript in your browser.
END_OF_DOCUMENT_TOKEN_TO_BE_REPLACED

This feature require that you enable JavaScript in your browser.
END_OF_DOCUMENT_TOKEN_TO_BE_REPLACED

This feature require that you enable JavaScript in your browser.
END_OF_DOCUMENT_TOKEN_TO_BE_REPLACED