This Sovereign Isle: Britain In and Out of Europe (Paperback) 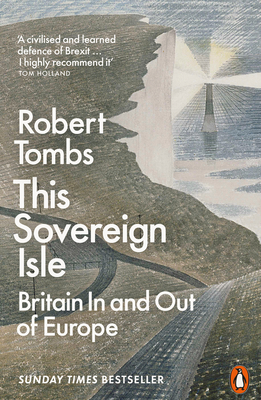 A leading pro-Brexit intellectual examines the historical context of the referendum vote, engaging with the arguments and fears of both sides

Geography comes before history. Islands cannot have the same history as continental plains. The United Kingdom is a European country, but not the same kind of European country as Germany, Poland or Hungary. For most of the 150 centuries during which Britain has been inhabited it has been on the edge, culturally and literally, of mainland Europe.

In this succinct book, Tombs shows that the decision to leave the EU is historically explicable - though not made historically inevitable - by Britain's very different historical experience, especially in the twentieth century, and because of their more extensive and deeper ties outside Europe. He challenges the orthodox view that Brexit was due solely to British or English exceptionalism: in choosing to leave the EU, the British, he argues, were in many ways voting as typical Europeans.

Robert Tombs is Emeritus Professor of French History at Cambridge, and a Fellow of St John's College. Most of his writing and teaching has been on French and European history and on Franco-British relations, for which he was awarded the Palmes Académiques by the French government. Since his foray into English history, with the publication of The English and Their History in 2014, he has become a frequent commentator on contemporary issues, and is co-editor of the pro-Brexit academic website Briefings for Britain.

This feature require that you enable JavaScript in your browser.
END_OF_DOCUMENT_TOKEN_TO_BE_REPLACED

This feature require that you enable JavaScript in your browser.
END_OF_DOCUMENT_TOKEN_TO_BE_REPLACED

This feature require that you enable JavaScript in your browser.
END_OF_DOCUMENT_TOKEN_TO_BE_REPLACED