The Templars: The Rise and Spectacular Fall of God's Holy Warriors (Paperback) 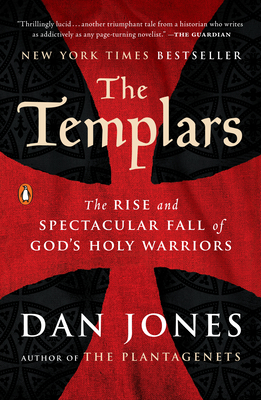 An instant New York Times bestseller, from the author of Crusaders, that finally tells the real story of the Knights Templar—“Seldom does one find serious scholarship so easy to read.” (The Times, Book of the Year)

A faltering war in the middle east. A band of elite warriors determined to fight to the death to protect Christianity's holiest sites. A global financial network unaccountable to any government. A sinister plot founded on a web of lies...

In 1119, a small band of knights seeking a purpose in the violent aftermath of the First Crusade set up a new religious order in Jerusalem, which was now in Christian hands. These were the first Knights Templar, elite warriors who swore vows of poverty and chastity and promised to protect Christian pilgrims to the Holy Land. Over the next 200 years, the Templars would become the most powerful network of the medieval world, speerheading the crusades, pionerring new forms of finance and warfare and deciding the fate of kings. Then, on October 13, 1307, hundreds of brothers were arrested, imprisoned and tortured and the order was disbanded among lurid accusations of sexual misconduct and heresy. But were they heretics or victims of a ruthlessly repressive state? Dan Jones goes back to the sources to bring their dramatic tale, so relevant to our own times, to life in a book that is at once authoritative and compulsively readable.

Dan Jones is the New York Times bestselling author of The Templars, The Plantagenets, Wars of the Roses, and Magna Carta. He wrote and presented the popular Netflix series Secrets of Great British Castles and appeared alongside George R.R. Martin in the official HBO film exploring the real history behind Game of Thrones. He is the historical consultant to Knightfall, an A&E drama on the legend of the Templars produced by Jeremy Renner.

“When it comes to rip-roaring medieval narratives, Jones has few peers, and in The Templars he finds the perfect subject. The warrior monks have always appealed to conspiracy theorists, and although Jones strips away the myths, he has great fun recounting their bloodthirsty crusading exploits.” -- The Sunday Times, History Book of the Year

"Dan Jones gives no credence to the conspiratorial fantasies that have been spun around the Templars over the years . . . His aim is to present a gripping historical narrative, and in this he succeeds . . . Religions collide and atrocities abound. Cries of 'Allahu akhbar' pierce the din of battle. The power of states is threatened, or seen to be threatened, by unaccountable forces with global tentacles. Information is unreliable and easily manipulated, allowing conspiracy theories to take root and spread." - Cullen Murphy, The Washington Post

"Dan Jones has created a gripping page-turner out of the dramatic history of the Templars, from their spiritual warrior beginnings until their tragic destruction by the French king and the pope. It is genuinely moving and a chilling contemporary warning about the abuse of power through persecution and lies."
-- Philippa Gregory, author of The White Queen

“They combined the warrior code of aristocratic knights with the poverty and religious devotion of monks. …In Jones’s bravura account, this tension between aristocratic killer and humble monk shadows the Templar story. Jones’s fast-paced history is laced with tales of blood and bravery, disaster and victory. . . . Drawing on Christian and Muslim sources, he carries the Templars through the crusades with clarity and verve. This is unabashed narrative history, fast-paced and full of incident.” – The Sunday Times

“Gripping… Jones tells the story of the Templars with energy and verve, regalling readers with well-chosen details and anecdotes. The Templars became poster boys of the early middle ages, famed for their piety and their military prowess. It was an intoxicating combination... The author’s ambition, he says, is 'to write a book that will entertain as well as inform.' He has done precisely that.” – Peter Frankopan, The Telegraph

"Business chiefs listen up, especially in the world of big tech where egos are becoming rather inflated . . . There's a vital message for those who get too powerful tucked into this new book: One day you'll draw the ire of someone more powerful, and they will attempt to destroy you. The caution, although not explicit, comes in the epic story of the warrior monks known as the Knights Templar whose activities have given rise to much speculation and theories, some reasonable and some absurd. Expert history writer Dan Jones digs deep for the facts and chronicles their history… Jones recounts the gruesome battles in the Holy Land where the warriors fought to either take or hold key positions. If you have any illusion that war was ever glamorous, then these passages should be a quick antidote.” – Simon Constable, Forbes

“The story of the Templars, the ultimate holy warriors, is an extraordinary saga of fanaticism, bravery, treachery and betrayal, and in Dan Jones they have a worthy chronicler. Templars is a wonderful book!”
— Bernard Cornwell, author of The Last Kingdom

"This is a fascinating story of fanaticism, set in a land still known for its brutality and strife. Jones is  an entertainer, but also a fine historian who knows how to render serious scholarship into accessible prose. Seldom does one find serious history that is so easy to read." -- The Times (London)

"In this thrillingly lucid account, Dan Jones demystifies the Templars in a story spanning hundreds of years and countless rulers, knights and archbishops, a seemingly disproportionate number of whom ended up beheaded . . . Anyone who has read Jones’s earlier medieval chronicles will know what to expect here: fast-paced narrative history depicted with irresistible verve, bloody battle scenes and moments of laugh-out-loud wit. There are contemporary parallels, too, with the Templars eventually being laid low by the medieval equivalent of a kind of 'fake news': anti-Templar propaganda spread by the church. This is another triumphant tale from a historian who writes as addictively as any page-turning novelist."
--The Guardian

“Thank God this book is sane… Jones tells the engrossing story of an ascetic order of warrior knights chiefly dedicated to the defense of pilgrims on the road to Jerusalem… Templars is based on a wide-ranging and thorough research and relies overwhelmingly on primary sources… It reads like a morality tale.”
– Robert Irwin, Literary Review

“An up-close look at the legendary band of Crusaders. Jones examines the storied Templars, an organization of quasi-monastic warriors who rose to fame and power in the midst of the Crusades, only to rapidly collapse in questionable scandals . . . A meaty, well-researched history replete with primary source quotes [and] accessible to general readers. An exceptional introduction to the Templars.”
--Kirkus Reviews (starred)

Praise for Dan Jones’s The Plantagenets:

“A real life Game of Thrones,  as dramatic and blood-soaked as any work of fantasy . . . Fast-paced and accessible, The Plantagenets is old-fashioned storytelling and will be particularly appreciated by those who like their history red in tooth and claw.” —The Wall Street Journal

“The Plantagenets is rich in detail and scene-setting. . . . The Plantagenets’ saga is the story of how English monarchs learned, or failed to learn, how to be kings, and how the English people, commoners and barons alike, learned how to limit their powers.” —USA Today

“Jones has brought the Plantagenets out of the shadows, revealing them in all their epic heroism and depravity. His is an engaging and readable account . . . researched with exacting standards. [A] compelling reading.” —The Washington Post

“Outstanding. Majestic in its sweep, compelling in its storytelling, this is narrative history at its best. A thrilling dynastic history of royal intrigues, violent skullduggery, and brutal warfare across two centuries of British history.”
—Simon Sebag Montefiore, author of Young Stalin

“Some of the greatest stories in all of English history . . . rich in pageantry and soaked in blood.”
—Lewis Lapham, Lapham’s Quarterly

“Dan Jones’s epic portrait of the medieval royals is a timely reminder that things haven’t always been so rosy for those on the throne.” —GQ

Praise for Dan Jones’s The Wars of the Roses:

“Exhilarating, epic, blood-and-roses history . . . Thrilling. There is fine scholarly intuition on display here and a mastery of the grand narrative; it is a supremely skillful piece of storytelling.” —The Sunday Telegraph

“An engrossing read and thoroughly enjoyable.” —The Spectator

“If you’re a fan of Game of Thrones or The Tudors, then Dan Jones’ swashbucklingly entertaining slice of medieval history will be right up your alley. . . . Every bit as entertaining and readable as his previous blockbuster The Plantagenets.” —Daily Express

“Jones is a born storyteller, peopling the terrifying uncertainties of each moment with a superbly drawn cast of characters and powerfully evoking the brutal realities of civil war.” —The Evening Standard

“Jones tells a good story. That is a good thing, since storytelling has gone out of favor among so many historians. . . . His delightful wit is as ferocious as the dreadful violence he describes.”—The Times (London)

“Dan Jones has an enviable gift for telling a dramatic story while at the same time inviting us to consider serious topics like liberty and the seeds of representative government.”
—Antonia Frasier

This feature require that you enable JavaScript in your browser.
END_OF_DOCUMENT_TOKEN_TO_BE_REPLACED

This feature require that you enable JavaScript in your browser.
END_OF_DOCUMENT_TOKEN_TO_BE_REPLACED

This feature require that you enable JavaScript in your browser.
END_OF_DOCUMENT_TOKEN_TO_BE_REPLACED