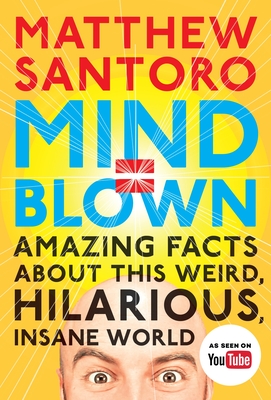 YouTube sensation Matthew Santoro amazes with eye-opening facts that are sure to blow your mind.

Matthew Santoro's originality and humor has attracted millions of fans, making him a beloved YouTube star. His weekly videos on amazing and little-known facts are eagerly anticipated by his many subscribers and followers around the world. In his first-ever book, Matthew's love of weird and wacky knowledge explodes with new facts and stories from around the planet, and beyond. Surprising, and always entertaining, Mind = Blown offers even more of Matthew's unique take on this hilarious, crazy world:

The most ridiculous laws from past and present
Crazy doppelgangers of people, places, and unexpected things
Historical wizards who actually lived
Real-life animal avengers
And a special section: Japan Blows My Mind!

From shin-kicking competitions and beer pong-playing robots, to enormous fire-balls shooting through space, you won't believe what you'll discover in Mind = Blown. But beware: there is too much astounding trivia for any one mind to contain!

MATTHEW SANTORO is a YouTube star whose videos have been viewed more than 700 million times. He is best known for his top-ten lists of strange and surprising facts, and his popular series “50 Things to Blow Your Mind.” A former accountant, he won the 2015 Hubub #AcademySocial award, as well as the fan vote for the 2015 Shorty Awards “YouTube Star Of The Year.” He lives in Toronto, Canada.

This feature require that you enable JavaScript in your browser.
END_OF_DOCUMENT_TOKEN_TO_BE_REPLACED

This feature require that you enable JavaScript in your browser.
END_OF_DOCUMENT_TOKEN_TO_BE_REPLACED

This feature require that you enable JavaScript in your browser.
END_OF_DOCUMENT_TOKEN_TO_BE_REPLACED