The Better Angels of Our Nature: Why Violence Has Declined (Paperback) 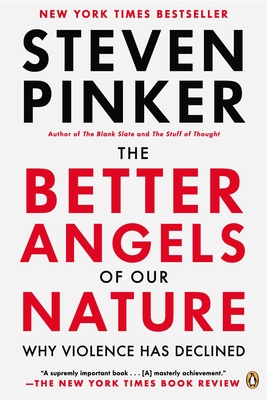 “If I could give each of you a graduation present, it would be this—the most inspiring book I've ever read." —Bill Gates

A provocative history of violence—from the New York Times bestselling author of The Stuff of Thought, The Blank Slate, and Enlightenment Now.

Believe it or not, today we may be living in the most peaceful moment in our species' existence. In his gripping and controversial new work, New York Times bestselling author Steven Pinker shows that despite the ceaseless news about war, crime, and terrorism, violence has actually been in decline over long stretches of history. Exploding myths about humankind's inherent violence and the curse of modernity, this ambitious book continues Pinker's exploration of the essence of human nature, mixing psychology and history to provide a remarkable picture of an increasingly enlightened world.

Steven Pinker is the Harvard College Professor of Psychology at Harvard University. A two-time Pulitzer Prize finalist and the winner of many awards for his research, teaching, and books, he has been named one of Time's 100 Most Influential People in the World Today and Foreign Policy's 100 Global Thinkers.

“If I could give each of you a graduation present, it would be this—the most inspiring book I've ever read."
—Bill Gates (May, 2017)

"My favorite book of the last decade is [Steven] Pinker's Better Angels of Our Nature. It is a long but profound look at the reduction in violence and discrimination over time."—Bill Gates, founder of Microsoft

"For anyone interested in human nature, the material is engrossing, and when the going gets heavy, Pinker knows how to lighten it with ironic comments and a touch of humor. . . . A supremely important book. To have command of so much research, spread across so many different fields, is a masterly achievement."—The New York Times Book Review

"Better Angels is a monumental achievement. His book should make it much harder for pessimists to cling to their gloomy vision of the future. Whether war is an ancient adaptation or a pernicious cultural infection, we are learning how to overcome it."—Slate


Praise for THE STUFF OF THOUGHT

“The majesty of Pinker’s theories is only one side of the story.  The other side is the modesty of how he built them.  It all makes sense, when you look at it the right way.”— The New York Times Book Review

“Engaging and witty …Everyone with an interest in language and how it gets to be how it is—that is, everyone interested in how we get to be human and do our human business—should read THE STUFF OF THOUGHT.”— Science

Praise for THE BLANK SLATE

This feature require that you enable JavaScript in your browser.
END_OF_DOCUMENT_TOKEN_TO_BE_REPLACED

This feature require that you enable JavaScript in your browser.
END_OF_DOCUMENT_TOKEN_TO_BE_REPLACED

This feature require that you enable JavaScript in your browser.
END_OF_DOCUMENT_TOKEN_TO_BE_REPLACED