War in the Gulf, 1990-91: The Iraq-Kuwait Conflict and Its Implications (Paperback) 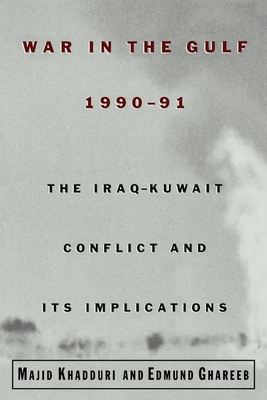 By Majid Khadduri, Edmund Ghareeb
Email or call for price.

For most Americans, the war against Iraq lingers in memory as a vast morality play, a drama offering ready made heroes and villains: a glowering dictator in military uniform, hapless Kuwaiti refugees with tales of persecution, plucky pilots with high-tech wizardry, and a defiant American president, ringing Churchillian as he drew a line in the sand. But this characterization of the war is greatly oversimplified, a one-dimensional portrait, lacking in context and nuance. In War in the Gulf, 1990 91, eminent scholars Majid Khadduri and Edmund Ghareeb paint a very different picture, one that brings historical depth to the portrait, and displays the actions of many of the participants in a new and revealing light.
Khadduri and Ghareeb offer a far more accurate and complex portrait of the Iraq-Kuwait conflict, providing a wealth of background information not readily available before. They made a distinction between the differences between Iraq and Kuwait over frontiers, territory, and sovereignty and the method pursued by Iraqi leaders to resolve those differences. They explore, for instance, the history of relations between Iraq and Kuwait, revealing that Kuwait had once been a part of Basra (in southern Iraq) during the Ottoman rule, and only became a separate country while under British control (it was the British in fact who drew the much-disputed boundary line between Iraq and Kuwait). Khadduri and Ghareeb describe the many decades of struggle to resolve the boundary issue, examining the repeated attempts by other Arab states to mediate according to Islamic traditions of consultation and peaceful resolution within the faith. The authors also show how Saddam Husayn's war with Iran exacerbated the boundary tensions. Because of the decade-long war, Iraq badly needed oil revenue to repay wartime loans and to rebuild, but Kuwait persisted in pumping far beyond its OPEC quota, driving down prices, and costing Iraq billions of dollars of revenue. The book reveals how Kuwait spurned Arab attempts to mediate this clash over oil prices as well as the longstanding boundary dispute, frustrating efforts to resolve this crisis by peaceful means. In one particularly interesting section, the book examines the diplomatic talks during the early summer of 1990, both among various Arab nations (most notably, Iraq, Saudi Arabia, Egypt, and Kuwait), and with Saddam Husayn and the United States (they show how messages from Washington and a visit by a congressional delegation lead by Senator Dole convinced the Iraqi leaders that they would be allowed to settle their problems with Kuwait without outside interference). Khadduri and Ghareeb carry us through to the present, exploring the war and its aftermath, from the uprisings against Baghdad, to the continuing U.N. sanctions, to the recent defections from Saddam's inner circle.
War in the Gulf is a balanced, eye-opening account of one of the central events of recent years. It corrects the Western views of most reporting, explaining the frame of mind of the participants as no one has done before and causing us to examine anew such questions as who was responsible for the conflict, and what might have happened if the United States had not intervened so rapidly.

Majid Khadduri is University Distinguished Professor Emeritus and founder of the Center for Middle East Studies at the Johns Hopkins University School of Advanced International Studies, and the author of The Gulf War, on the Iran-Iraq war. Edmund Ghareeb is Adjunct Professor of History at George Washington University and a specialist on media affairs.

This feature require that you enable JavaScript in your browser.
END_OF_DOCUMENT_TOKEN_TO_BE_REPLACED

This feature require that you enable JavaScript in your browser.
END_OF_DOCUMENT_TOKEN_TO_BE_REPLACED

This feature require that you enable JavaScript in your browser.
END_OF_DOCUMENT_TOKEN_TO_BE_REPLACED