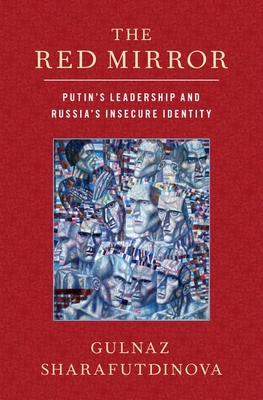 What explains Putin's enduring popularity in Russia? In The Red Mirror, Gulnaz Sharafutdinova uses social identity theory to explain Putin's leadership. The main source of Putin's political influence, she finds, lies in how he articulates the shared collective perspective that unites many
Russian citizens. Under his tenure, the Kremlin's media machine has tapped into powerful group emotions of shame and humiliation--derived from the Soviet transition in the 1990s--and has politicized national identity to transform these emotions into pride and patriotism. Culminating with the
annexation of Crimea in 2014, this strategy of national identity politics is still the essence of Putin's leadership in Russia. But victimhood-based consolidation is also leading the country down the path of political confrontation and economic stagnation. To enable a cultural, social, and political
revival in Russia, Sharafutdinova argues, political elites must instead focus on more constructively conceived ideas about the country's future. Integrating methods from history, political science, and social psychology, The Red Mirror offers the clearest picture yet of how the nation's majoritarian
identity politics are playing out.

Gulnaz Sharafutdinova is Reader in Russian Politics at King's College London. She is the author of Political Consequences of Crony Capitalism Inside Russia (Notre Dame University Press) and co-editor of Soviet Society in the Era of Late Socialism, 1964-1985 (Lexington Press).

This feature require that you enable JavaScript in your browser.
END_OF_DOCUMENT_TOKEN_TO_BE_REPLACED

This feature require that you enable JavaScript in your browser.
END_OF_DOCUMENT_TOKEN_TO_BE_REPLACED

This feature require that you enable JavaScript in your browser.
END_OF_DOCUMENT_TOKEN_TO_BE_REPLACED