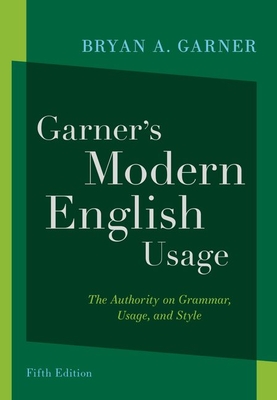 The most original and authoritative voice of today's English lexicography presents a fully revised new edition of his beloved usage dictionary When Bryan Garner published the first edition of A Dictionary of Modern American Usage in 1999, the book quickly became one of the most influential style guides ever written for the English language. After four previous editions and over twenty years, our language has evolved in many ways, and the powerful tool of big data has revolutionized lexicography. This extensively revised new edition fully captures these changes, featuring a thousand new entries and over two hundred replacement entries, thoroughly updated usage data and ratios on word frequency based on the Google Ngram Viewer, a more balanced coverage of World Englishes, not just American and British, and the inclusion of gender-neutral language. However, one thing has not changed: in no sense is this a "regular" dictionary but a masterpiece of lexicography written with wit and personality by one of the preeminent authorities on the English language. To put it in David Foster Wallace's words, Garner's discussion of rhetoric
and style still "borders on genius." From the (lost) battle between self-deprecating and self-depreciating to the misuse of it's for its, from the variant spelling patty-cake taking over pat-a-cake in American English to the singular uses of they, Garner explains the nuances of grammar and vocabulary and the linguistic blunders to which modern writers and speakers are prone, whether in word choice, syntax, phrasing, punctuation, or pronunciation. His empirical approach liberates English from two extremes: from the "purists" who maintain that split infinitives and sentence-ending prepositions are malfeasances and from the linguistic relativists who believe that whatever people say or write must necessarily be accepted. The purpose of Garner's dictionary is to help writers, editors, and speakers use the language effectively. And it does so in a playful and persuasive way that will help you sound "grammatical but relaxed, refined but natural, correct but unpedantic."

Bryan A. Garner's work has been recognized as pioneering across a wide range of fields, including English usage, grammar, legislative drafting, and legal lexicography. He has written more than 25 books, many of them award-winning, including The Chicago Guide to Grammar, Usage, and Punctuation; Garner on Language and Writing; Reading Law: The Interpretation of Legal Texts and Making Your Case: The Art of Persuading Judges (both with Justice Antonin Scalia); Garner's Dictionary of Legal Usage; Legal Writing in Plain English; The Elements of Legal Style; The Winning Brief; and Ethical Communications for Lawyers. As editor in chief of Black's Law Dictionary and author of the grammar and usage chapter in The Chicago Manual of Style, he has become one of the most authoritative and widely cited English lexicographers. He is Distinguished Research Professor of Law at Southern Methodist University and president of LawProse Inc.

This feature require that you enable JavaScript in your browser.
END_OF_DOCUMENT_TOKEN_TO_BE_REPLACED

This feature require that you enable JavaScript in your browser.
END_OF_DOCUMENT_TOKEN_TO_BE_REPLACED

This feature require that you enable JavaScript in your browser.
END_OF_DOCUMENT_TOKEN_TO_BE_REPLACED