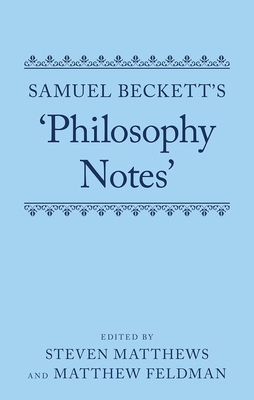 By Steven Matthews (Editor), Matthew Feldman (Editor)
$125.00
Special Order - may be out of print

The Irish writer and Nobel Prize winner, Samuel Beckett, assembled for himself a history of western philosophy during the 1930s, just at the point at which his first novel, Murphy, was coming together. The 'Philosophy Notes', together with related notes taken at that time about St. Augustine, thereafter provided Beckett with a store of knowledge, but also with phrases and images, which he took up in the major work that won him international and enduring fame, from the dramas Waiting for Godot and Endgame, through to the late prose works Worstward Ho and Stirrings Still. This edition presents, for the first time, Beckett's full 'Philosophy Notes', which constitute his most extensive unpublished text. The Notes display Beckett's own interests and emphases within the history of western philosophy, from the pre-Socratic Greeks onwards, together with more familiar figures in the study of his work, such as Descartes, Leibnitz, and Geulincx. Here we see Beckett's original thoughts on all of these figures for the first time. The Notes also, tellingly and often comically, display Beckett's impatience with many aspects of philosophy, such as its anthropological or anthropomorphic bias, or the idealism of the Enlightenment and Kant. The Edition contains an extensive Introduction, outlining the origin of Beckett's Notes, his major sources and approach to them, the historical context for his view of philosophy, and the significance of Beckett's 'Philosophy Notes' within his mature writings. The many footnotes then suggest ways in which particular aspects of the philosophy narrated here by Beckett suggest fresh insights into those later writings--the images, but also the creative impulses, behind some of his most famous texts. This Edition, further, raises larger questions about, and perspectives upon, the relation between philosophy and literature in the twentieth century and beyond.

This feature require that you enable JavaScript in your browser.
END_OF_DOCUMENT_TOKEN_TO_BE_REPLACED

This feature require that you enable JavaScript in your browser.
END_OF_DOCUMENT_TOKEN_TO_BE_REPLACED

This feature require that you enable JavaScript in your browser.
END_OF_DOCUMENT_TOKEN_TO_BE_REPLACED