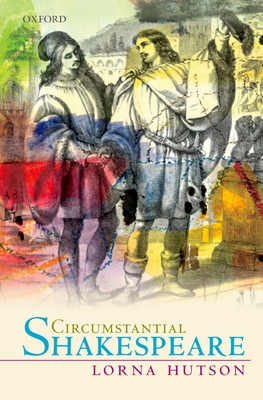 Shakespeare's characters are thought to be his greatest achievement--imaginatively autonomous, possessed of depth and individuality, while his plots are said to be second-hand and careless of details of time and place. This view has survived the assaults of various literary theories and has
even, surprisingly, been revitalized by the recent emphasis on the collaborative nature of early modern theatre. But belief in the autonomous imaginative life of Shakespeare's characters depends on another unexamined myth: the myth that Shakespeare rejected neoclassicism, playing freely with
theatrical time and place. lCircumstantial Shakespeare explodes these venerable critical commonplaces. Drawing on sixteenth-century rhetorical pedagogy, it reveals the importance of topics of circumstance (of Time, Place, and Motive, etc.) in the conjuring of compelling narratives and vivid mental
images. 'Circumstances'--which we now think of as incalculable contingencies--were originally topics of forensic inquiry into human intention or passion. In drawing on the Roman forensic tradition of circumstantial proof, Shakespeare did not ignore time and place. His brilliant innovation was to use
the topics of circumstance to imply offstage actions, times and places in terms of the motives and desires we attribute to the characters. His plays thus create both their own vivid and coherent dramatic worlds and a sense of the unconscious feelings of characters inhabiting them. lCircumstantial Shakespeare offers new readings of lRomeo and Juliet, King Lear, Lucrece, Two Gentlemen of Verona and lMacbeth, as well as new interpretations of Sackville and Norton's lGorboduc and Beaumont and Fletcher's lThe Maid's Tragedy. It engages with eighteenth-century Shakespeare
criticism, contemporary Shakespeare criticism, semiotics of theatre, Roman forensic rhetoric, humanist pedagogy, the prehistory of modern probability, psychoanalytic criticism and sixteenth-century constitutional thought.

Lorna Hutson, Merton Professor of English Literature, Merton College, University of Oxford Lorna Hutson is the Merton Professor of English Literature at the University of Oxford. She was educated in San Francisco, Edinburgh and Oxford and has taught at Queen Mary, University of London and at the University of California at Berkeley. Her books include lThomas Nashe in Context (1989), lTheUsurer's Daughter (1994), lFeminism and Renaissance Studies (1999), lRhetoric and Law in Early Modern Europe (with Victoria Kahn, 2001) and lThe Invention of Suspicion (2007), which won the Roland H. Bainton prize for literature in 2008. She has held fellowships from the Guggenheim, the Folger, theHuntington, the AHRC and the Leverhulme Trust.

This feature require that you enable JavaScript in your browser.
END_OF_DOCUMENT_TOKEN_TO_BE_REPLACED

This feature require that you enable JavaScript in your browser.
END_OF_DOCUMENT_TOKEN_TO_BE_REPLACED

This feature require that you enable JavaScript in your browser.
END_OF_DOCUMENT_TOKEN_TO_BE_REPLACED