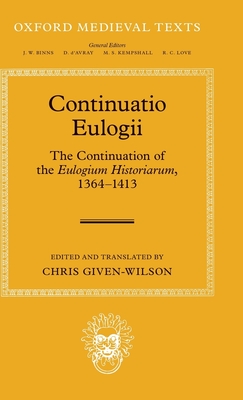 The Continuation of the Eulogium Historiarum is one of the major contemporary narratives of the reigns of Richard II and Henry IV. It covers the dramatic half century from 1364-1413, including the later years of the ailing Edward III (who died in 1377), the turbulent reign and ultimate fall of
Richard II (deposed in 1399), and the struggles of his supplanter, Henry IV (who died in 1413) to establish the Lancastrian regime. It is written in a picturesque and anecdotal style, with a great deal of material not found in other contemporary chronicles. Although known and referred to for nearly
two hundred years, it has never been translated into English before. This edition also includes a new transcription of the sole surviving British Library manuscript and a thorough investigation of the authorship, sources, and composition of what has always been regarded as an enigmatic source.

Chris Given-Wilson spent his career teaching Medieval History at the University of St Andrews, as lecturer (from 1978) and then Professor of Medieval History (from 1998). His work has focused on the political and social history of late medieval England and upon historical writing, especiallychronicles. He was for many years Chair of the Medieval History Department at St Andrews, and subsequently Head of School of History. He retired in 2014 and is now Emeritus Professor of Medieval History. He is the author or editor of eleven books and some thirty articles; his books includeChronicles: The Writing of History in Medieval England (2004), and Henry IV (2016), and he was the general editor of The Parliament Rolls of Medieval England 1275-1504 (16 vols, 2005). He was awarded the Alexander Prize of the Royal Historical Society in 1987, and Henry IV was shortlisted for theWolfson History Prize 2017.

This feature require that you enable JavaScript in your browser.
END_OF_DOCUMENT_TOKEN_TO_BE_REPLACED

This feature require that you enable JavaScript in your browser.
END_OF_DOCUMENT_TOKEN_TO_BE_REPLACED

This feature require that you enable JavaScript in your browser.
END_OF_DOCUMENT_TOKEN_TO_BE_REPLACED