The Triumph of the Moon: A History of Modern Pagan Witchcraft (Paperback) 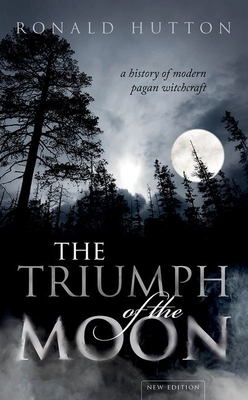 'a brilliant history'
The Sunday Times 'makes for riveting reading'
The Independent Modern pagan witchcraft is arguably the only fully-formed religion England has given the world, and has now spread across four continents. This second edition of The Triumph of the Moon extensively revises the first full-scale scholarly study of modern pagan witchcraft. Ronald Hutton examines the nature and development of this religion, and offers a history of attitudes to witchcraft, paganism and magic in British society since 1800. Its pages reveal village cunning folk, Victorian ritual magicians, classicists and archaeologists, leaders of woodcraft and scouting movements, Freemasons, and members of rural secret societies. We also find some of the leading figures of English literature, from the Romantic poets to W. B. Yeats, D. H. Lawrence and Robert Graves, as well as the main personalities who have represented pagan witchcraft to the public world since 1950. Thriller writers like Dennis Wheatley, and films and television programmes, get similar coverage, as does tabloid journalism. The material is by its nature often sensational, and care is taken throughout to distinguish fact from fantasy, in a manner not previously applied to most of the stories involved. Meticulously researched, The Triumph of the Moon presents an authoritative insight into an aspect of modern cultural history which has attracted sensational publicity but has hitherto been little understood. This edition incorporates new research carried out by the author as well as research by others who have been inspired by this book over the twenty years since its first publication.

Ronald Hutton, Professor of History, Bristol University Ronald Hutton is senior Professor of History at the University of Bristol, and a Fellow of the Royal Historical Society, the Society of Antiquaries, the Learned Society of Wales, and the British Academy. He is the historian on the board of trustees which runs English Heritage, and chair of the Blue Plaques panel which awards commemorative plaques to historic buildings. He has published sixteen books and eighty-one essays on a wide range of subjects including British history between 1400 and 1700, ancient and modern paganism in Britain, the British ritual year, and Siberian shamanism. His previous publications include Rise and Fall of Merry England (OUP 1994), Stations of the Sun (OUP 1996; current ed. 2001), and The Witch: A History of Fear from Ancient Times to the Present (Yale University Press 2017).

This feature require that you enable JavaScript in your browser.
END_OF_DOCUMENT_TOKEN_TO_BE_REPLACED

This feature require that you enable JavaScript in your browser.
END_OF_DOCUMENT_TOKEN_TO_BE_REPLACED

This feature require that you enable JavaScript in your browser.
END_OF_DOCUMENT_TOKEN_TO_BE_REPLACED