The Earthquake Observers: Disaster Science from Lisbon to Richter (Paperback) 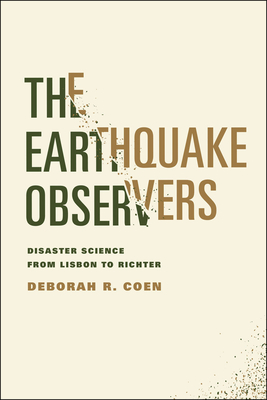 By Deborah R. Coen
Email or call for price.

Earthquakes have taught us much about our planet’s hidden structure and the forces that have shaped it. This knowledge rests not only on the recordings of seismographs but also on the observations of eyewitnesses to destruction. During the nineteenth century, a scientific description of an earthquake was built of stories—stories from as many people in as many situations as possible. Sometimes their stories told of fear and devastation, sometimes of wonder and excitement.

In The Earthquake Observers, Deborah R. Coen acquaints readers not only with the century’s most eloquent seismic commentators, including Alexander von Humboldt, Charles Darwin, Mark Twain, Charles Dickens, Karl Kraus, Ernst Mach, John Muir, and William James, but also with countless other citizen-observers, many of whom were women. Coen explains how observing networks transformed an instant of panic and confusion into a field for scientific research, turning earthquakes into natural experiments at the nexus of the physical and human sciences. Seismology abandoned this project of citizen science with the introduction of the Richter Scale in the 1930s, only to revive it in the twenty-first century in the face of new hazards and uncertainties. The Earthquake Observers tells the history of this interrupted dialogue between scientists and citizens about living with environmental risk.

Deborah R. Coen is professor of history and chair of Yale University’s Program in the History of Science and Medicine. She is the author of Vienna in the Age of Uncertainty: Science, Liberalism, and Private Life and The Earthquake Observers: Disaster Science from Lisbon to Richter, both published by the University of Chicago Press.

“Crowd-sourced science has rarely been so thrilling. As Deborah R. Coen reveals, the rumbustious history of seismology began with roving scientists gathering locals’ accounts of shocks, shudders and thumps. Luminaries from Charles Darwin to Alexander von Humboldt reported, too; Charles Dickens likened a quake to a great beast ‘shaking itself and trying to rise.' Coen argues for a hybridized ‘disaster science,' factoring in such responses from ‘human seismographs’ with geology and instrumental data.”
— Nature

“The cleverly ambiguous title of this book plays with the many uncertainties that surround our experience of earthquakes. Just who are these ‘observers’: are they scientists, farmers, or city dwellers? In answering this question, Deborah Coen offers a wealth of information in a book that reads with the appeal of fiction. In ten chapters, from “The Human Seismograph” to “A True Measure of Violence: California 1906–1935”, she spins a compelling yarn of how nineteenth- and early twentieth-century scientists gathered accounts by observers of seismic events that could furnish quantifiable information.”
— Luciana Astiz, University of California, San Diego

“The book is well written, the documentation meticulous, and the depth of research impressive. At many points in the narrative, I marveled at the extent of the relevant material Coen has unearthed. . . . [F]ascinating.”
— Gregory C. Beroza

“Scholarly and well-written. . . . Highly recommended for both library and private purchase. Deborah Coen is to be congratulated for producing a first class introduction to a much-neglected theme within the history of earthquake science which should appeal, not only to seismologists, but also to historians of science and the hazard research community more generally. This is a successful volume by a highly talented academic writer.”
— David K. Chester, University of Liverpool

“A fascinating multisited study of the changing nature of material and human instruments through which communities have understood modern disasters.”
— Carla Nappi

“The superb writing in this book is engaging and outstanding for its insight into the human reaction to environmental disturbances. Highly recommended.”
— T. L. T. Grose, Colorado School of Mines

“[L]ively. . . . Deborah Coen has offered us an interesting story about how earthquakes affect ordinary people and how their observations were the basis of the early stages of seismology. . . . Coen’s book can help us to consider these human aspects of earthquakes, often forgotten by seismologists.”
— Metascience

“The Earthquake Observers is a forceful, well written, and on the whole persuasive—dare I say it, groundbreaking—attempt to inject the importance of eyewitness reports into the history of seismology, chiefly during the 19th and early 20th centuries, concluding with the invention of Richter’s magnitude scale.”
— Andrew Robinson

“Coen’s important and original new book is a welcome contribution from a scholar capable of showing the deep historical contingencies involved in the early history of seismology, a key modern disaster science at the center of contemporary disaster preparedness.”
— Scott Gabriel Knowles, Drexel University

“Deborah R. Coen brings to vivid life the human seismographic networks in four different countries, whose members were a principal source of data about earthquakes before the 1930s. She treats her subject with a capacious interpretive vision, revealing that, in relying on human reports, early earthquake science encompassed not just the measurable movements of the earth but also the human experience of the unsteady ground, including fear and terror. This is a stunningly original work, at once an eye-opening history and an implicit guide to how we might advantageously approach contemporaneous threats of disasters.”

“This superb book enables us to recognize seismology as a human science. Deborah R. Coen shows how earthquakes were assigned magnitudes according to a scale defined by human experience, and how people dispersed across the countryside learned to deploy precisely a language of earthquake description. Most strikingly of all, she situates these observers as active participants in processes of scientific data-gathering that formed the basis for a physics of seismic events and, with it, a scientific culture of democratic public reason.”
— Theodore M. Porter, University of California, Los Angeles

“The disastrous tsunamis and earthquakes of recent years have painfully revealed the shortcomings of seismology as a predictive science. We might be tempted, then, to dream about a high-tech world of seismic laboratories that save us from future cataclysm. But Deborah R. Coen’s compelling story reveals that such dreams, which have their roots in the nineteenth century, are perhaps misguided. She reveals a lost world of everyday earthquake observation in which expert and citizen, scientist and layperson, were bound together by the ties of mutual effort and responsibility. Today, seismologists and the rest of us might want to consider what has been sacrificed. This is not merely a book about the past; it prompts the question: how will society cope with the inevitable natural disasters of the future? Coen’s finely woven story reveals that there have been, and could be, entirely different ways of studying and coping with earthquakes than those we have become accustomed to imagining.”

“The Earthquake Observers is more than just a history of seismology: it tells the story of how ideas about earthquakes influenced human culture in the modern era. Deborah R. Coen is as entertaining as she is erudite. This fascinating study should appeal to a wide readership; strongly recommended.”
— Roger M. W. Musson, British Geological Survey

This feature require that you enable JavaScript in your browser.
END_OF_DOCUMENT_TOKEN_TO_BE_REPLACED

This feature require that you enable JavaScript in your browser.
END_OF_DOCUMENT_TOKEN_TO_BE_REPLACED

This feature require that you enable JavaScript in your browser.
END_OF_DOCUMENT_TOKEN_TO_BE_REPLACED