How the Tea Party Captured the GOP: Insurgent Factions in American Politics (Paperback) 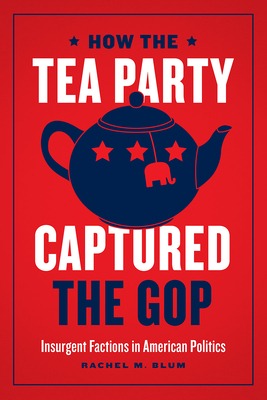 By Rachel M. Blum
Email or call for price.
usually available in 3-7 days

The rise of the Tea Party redefined both the Republican Party and how we think about intraparty conflict. What initially appeared to be an anti-Obama protest movement of fiscal conservatives matured into a faction that sought to increase its influence in the Republican Party by any means necessary. Tea Partiers captured the party’s organizational machinery and used it to replace established politicians with Tea Party–style Republicans, eventually laying the groundwork for the nomination and election of a candidate like Donald Trump.

In How the Tea Party Captured the GOP, Rachel Marie Blum approaches the Tea Party from the angle of party politics, explaining the Tea Party’s insurgent strategies as those of a party faction. Blum offers a novel theory of factions as miniature parties within parties, discussing how fringe groups can use factions to increase their political influence in the US two-party system. In this richly researched book, the author uncovers how the electoral losses of 2008 sparked disgruntled Republicans to form the Tea Party faction, and the strategies the Tea Party used to wage a systematic takeover of the Republican Party. This book not only illuminates how the Tea Party achieved its influence, but also provides a framework for identifying other factional insurgencies.

“For all the talk of polarization, we know less than we should about the pressures pushing parties away from the median, which makes this book particularly welcome. As Blum traces the relation between the Tea Party and the Republican Party that the insurgency sought, with great success, to push rightwards, she brings impressive evidence to bear, including long-form interviews with Tea Party activists, network analysis, and use of text-as-data.”
— Daniel Schlozman, Johns Hopkins University

This feature require that you enable JavaScript in your browser.
END_OF_DOCUMENT_TOKEN_TO_BE_REPLACED

This feature require that you enable JavaScript in your browser.
END_OF_DOCUMENT_TOKEN_TO_BE_REPLACED

This feature require that you enable JavaScript in your browser.
END_OF_DOCUMENT_TOKEN_TO_BE_REPLACED