Tinker to Evers to Chance: The Chicago Cubs and the Dawn of Modern America (Paperback) 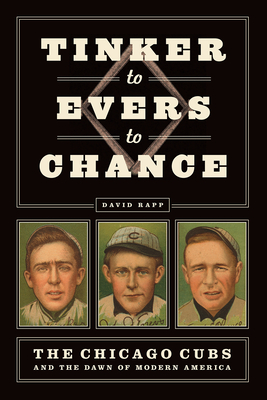 Their names were chanted, crowed, and cursed. Alone they were a shortstop, a second baseman, and a first baseman. But together they were an unstoppable force. Joe Tinker, Johnny Evers, and Frank Chance came together in rough-and-tumble early twentieth-century Chicago and soon formed the defensive core of the most formidable team in big league baseball, leading the Chicago Cubs to four National League pennants and two World Series championships from 1906 to 1910. At the same time, baseball was transforming from small-time diversion into a nationwide sensation. Americans from all walks of life became infected with “baseball fever,” a phenomenon of unprecedented enthusiasm and social impact. The national pastime was coming of age.

Tinker to Evers to Chance examines this pivotal moment in American history, when baseball became the game we know today. Each man came from a different corner of the country and brought a distinctive local culture with him: Evers from the Irish-American hothouse of Troy, New York; Tinker from the urban parklands of Kansas City, Missouri; Chance from the verdant fields of California’s Central Valley. The stories of these early baseball stars shed unexpected light not only on the evolution of baseball and on the enthusiasm of its players and fans all across America, but also on the broader convulsions transforming the US into a confident new industrial society. With them emerged a truly national culture.

This iconic trio helped baseball reinvent itself, but their legend has largely been relegated to myths and barroom trivia. David Rapp’s engaging history resets the story and brings these men to life again, enabling us to marvel anew at their feats on the diamond. It’s a rare look at one of baseball’s first dynasties in action.

David Rapp has been a political journalist and publishing executive in Washington, DC, for more than thirty years. He is the former editor of Congressional Quarterly, as well as the author of How the U.S. Got into Agriculture—and Why It Can’t Get Out.

“The compelling narrative not only details the feats these three achieved in helping establish a Cubs dynasty, but also chronicles the metamorphosis of the new twentieth-century nation that embraced baseball as a game that reflected the urban strength developed in modern industry while also offering green-field comfort to city-dwellers nostalgic for a rural past. A potent reminder of how America first fell in love with its national pastime.”
— Starred Review

“Vividly details the lives of all three players, weaving together how they converged in Chicago at the beginning of the 20th century. Along the way, Rapp tells the story of a changing America that became suddenly and almost inexplicably gripped with baseball fever.”
— Chicago Magazine

“Rapp connects these baseball stories to larger cultural themes such as social and economic class, the New York–Chicago rivalry, and the emerging media technologies during this period. Highly recommended for baseball fans and those interested in early 20th-century American history.”
— Library Journal

"On one level, Mr. Rapp has written a highly readable history of baseball in its early years. . . . But beyond that, he has given us a highly readable and deeply researched social and cultural history of the United States during the great years of our transition to an industrial society."
— Washington Times

“Political journalist and publisher David Rapp may have been based in Washington, DC, for thirty years, but he seems to have left his heart in Chicago: his knowledge of Second City baseball and the city itself is deep and intensive.”
— History News Network

“The Cubs of Tinker, Evers, and Chance won four National League pennants between 1905 and 1910, and back-to-back World Series in ’07 and ’08. As no Chicago baseball fan needs reminding, they’d famously go more than a century, until 2016, without winning another. . . . They did all of it at a time when baseball, like the city of Chicago and the rest of the big country around it, was daring to reimagine itself in a way that would make America embrace it as the national pastime.”
— Washington Independent Review of Books

“Rapp . . . show(s) the role baseball, a relatively new sport back then, played in changing the lives of the three men who came from markedly different backgrounds. He also details how the game, thanks in part to the success of the Cubs, gained a massive foothold in Chicago and elsewhere throughout the country.”
— Northwest Indiana Times

“Exceptionally well researched, written, organized and presented, Tinker to Evers to Chance is a ‘must’ for the legions of Chicago Cubs fans. Impressively informative and a terrifically entertaining read for all baseball enthusiasts, it is an absolutely essential and core addition to both community and academic library baseball history collections.”
— Midwest Book Review

“This volume should appeal to baseball fans and history buffs alike. And the fact that Rapp writes very well adds to that appeal.”
— SABR's The Inside Game

Nonfiction Winner
— 2018 Book of the Year

“Finally, the team that won more games over a five-year period than any other club gets its due. Rapp illuminates the Cubs of Tinker, Evers, and Chance against the backdrop of a fast-changing America. He takes us on a fun, swift-moving ride bursting with colorful characters and engaging stories.”
— Tom Verducci, author of The Cubs Way: The Zen of Building the Best Team in Baseball and Breaking the Curse

“In the first decade of the twentieth century, America, Chicago, and baseball were revving up and feeling their oats, in tandem. Rapp’s telling of this coming-of-age story crackles with the energy of the era he describes.”
— George F. Will, author of A Nice Little Place on the North Side: Wrigley Field at One Hundred

“One of the best treatments of baseball history I have read. Rapp makes a persuasive case about the role of the Cubs mini-dynasty and the Tinkers, Evers, and Chance trio in making baseball our national pastime and, in a small but significant way, ushering in modern American society. Rapp is a terrific writer who can keep you turning the pages.”
— Robert Pruter, author of The Rise of American High School Sports and the Search for Control, 1880–1930

“Rapp has written more than a baseball book about the best team of the dead-ball era, the 1906–10 Chicago Cubs. This is also a well-researched and cogently argued story about America at the turn of the twentieth century. The rivalry between the cities of New York and Chicago, newspapers and the public square, and regional and social influences on the development of ballplayers all figure prominently in the narrative. Well worth the historical lesson.”
— Bryan Soderholm-Difatte, author of The Golden Era of Major League Baseball: A Time of Transition and Integration

This feature require that you enable JavaScript in your browser.
END_OF_DOCUMENT_TOKEN_TO_BE_REPLACED

This feature require that you enable JavaScript in your browser.
END_OF_DOCUMENT_TOKEN_TO_BE_REPLACED

This feature require that you enable JavaScript in your browser.
END_OF_DOCUMENT_TOKEN_TO_BE_REPLACED