Defending the Filibuster, Revised and Updated Edition: The Soul of the Senate (Hardcover) 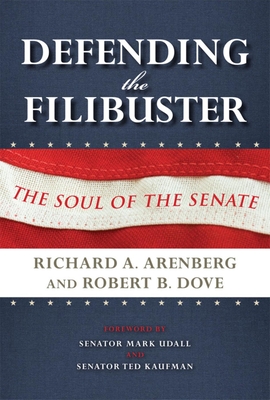 Recent legislative battles over healthcare reform, the federal budget, and other prominent issues have given rise to widespread demands for the abolition or reform of the filibuster in the US Senate. Critics argue that members' traditional rights of unlimited debate and amendment have led to paralyzing requirements for supermajorities and destructive parliamentary tactics such as secret holds. In Defending the Filibuster, a veteran Senate aide and a former Senate Parliamentarian maintain that the filibuster is fundamental to the character of the Senate. They contend that the filibuster protects the rights of the minority in American politics, assures stability and deliberation in government, and helps to preserve constitutional principles of checks and balances and separation of powers. Richard A. Arenberg and Robert B. Dove provide an instructive historical overview of the development of Senate rules, define and describe related procedures and tactics, examine cases related to specific pieces of legislation, and consider current proposals to end the filibuster or enact other reforms. Arguing passionately in favor of retaining the filibuster, they offer a stimulating assessment of the issues surrounding current debates on this contentious issue.

RICHARD A. ARENBERG served in senior congressional staff positions for 34 years as an aide to Majority Leader George Mitchell and Senators Paul Tsongas and Carl Levin. He currently is an Adjunct Lecturer in Political Science and Public Policy at Brown University, Northeastern University, and Suffolk University.ROBERT B. DOVE is Parliamentarian Emeritus of the U.S. Senate, having served as the Senate's Parliamentarian and Assistant Parliamentarian from 1966 until 2001. He has provided expert parliamentary advice to legislatures around the world. He currently is an Adjunct Professor at the Georgetown University Law Center, George Washington University, and George Mason University and counsels members of the Patton Boggs law firm on congressional procedure.

This feature require that you enable JavaScript in your browser.
END_OF_DOCUMENT_TOKEN_TO_BE_REPLACED

This feature require that you enable JavaScript in your browser.
END_OF_DOCUMENT_TOKEN_TO_BE_REPLACED

This feature require that you enable JavaScript in your browser.
END_OF_DOCUMENT_TOKEN_TO_BE_REPLACED