Progressivism: The Strange History of a Radical Idea (Hardcover) 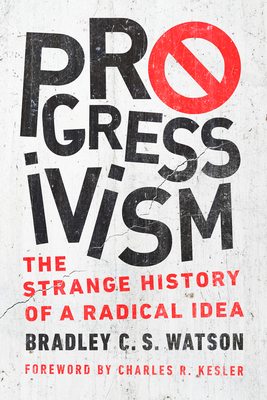 In Progressivism: The Strange History of a Radical Idea, Bradley C. S. Watson presents an intellectual history of American progressivism as a philosophical-political phenomenon, focusing on how and with what consequences the academic discipline of history came to accept and propagate it. This book offers a meticulously detailed historiography and critique of the insularity and biases of academic culture. It shows how the first scholarly interpreters of progressivism were, in large measure, also its intellectual architects, and later interpreters were in deep sympathy with their premises and conclusions. Too many scholarly treatments of the progressive synthesis were products of it, or at least were insufficiently mindful of two central facts: the hostility of progressive theory to the Founders' Constitution and the tension between progressive theory and the realm of the private, including even conscience itself. The constitutional and religious dimensions of progressive thought--and, in particular, the relationship between the two--remained hidden for much of the twentieth century. This pathbreaking volume reveals how and why this scholarly obfuscation occurred. The book will interest students and scholars of American political thought, the Progressive Era, and historiography, and it will be a useful reference work for anyone in history, law, and political science.

Bradley C. S. Watson is the Philip M. McKenna Chair in American and Western Political Thought at Saint Vincent College. He is the author and editor of numerous books, including Living Constitution, Dying Faith: Progressivism and the New Science of Jurisprudence and Progressive Challenges to the American Constitution: A New Republic.Charles R. Kesler is the Dengler-Dykema Distinguished Professor of Government at Claremont McKenna College and Claremont Graduate University. He is editor of the Claremont Review of Books.

This feature require that you enable JavaScript in your browser.
END_OF_DOCUMENT_TOKEN_TO_BE_REPLACED

This feature require that you enable JavaScript in your browser.
END_OF_DOCUMENT_TOKEN_TO_BE_REPLACED

This feature require that you enable JavaScript in your browser.
END_OF_DOCUMENT_TOKEN_TO_BE_REPLACED