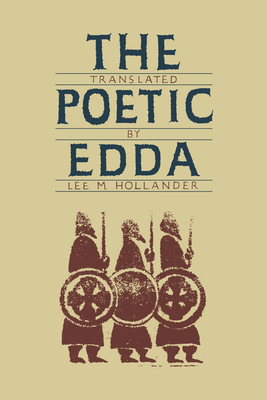 The Poetic Edda comprises a treasure trove of mythic and spiritual verse holding an important place in Nordic culture, literature, and heritage. Its tales of strife and death form a repository, in poetic form, of Norse mythology and heroic lore, embodying both the ethical views and the cultural life of the North during the late heathen and early Christian times.

Collected by an unidentified Icelander, probably during the twelfth or thirteenth century, The Poetic Edda was rediscovered in Iceland in the seventeenth century by Danish scholars. Even then its value as poetry, as a source of historical information, and as a collection of entertaining stories was recognized. This meticulous translation succeeds in reproducing the verse patterns, the rhythm, the mood, and the dignity of the original in a revision that Scandinavian Studies says "may well grace anyone's bookshelf."

Lee M. Hollander was Professor Emeritus of Germanic Languages at the University of Texas at Austin and an authority in Nordic language and literature. His translations of the best prose and poetry of the Old North-— among them Heimskringla: History of the Kings of Norway and The Saga of the Jom'svikings—have also appered under the imprint of the University of Texas Press.

. . . the translation may indeed be regarded as the crowning achievement of a great scholar.
— Scandinavian-American Bulletin

This feature require that you enable JavaScript in your browser.
END_OF_DOCUMENT_TOKEN_TO_BE_REPLACED

This feature require that you enable JavaScript in your browser.
END_OF_DOCUMENT_TOKEN_TO_BE_REPLACED

This feature require that you enable JavaScript in your browser.
END_OF_DOCUMENT_TOKEN_TO_BE_REPLACED