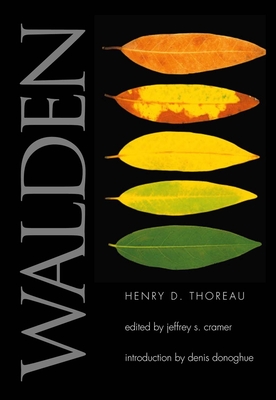 The ultimate gift edition of Walden for bibliophiles, aficionados, and scholars
"Replaces all other available editions of Walden as the most attractive and reliable way to approach this great American book."—Joel Porte, author of Consciousness and Culture: Emerson and Thoreau Reviewed

This is the authoritative edition of an American literaru classic: Henry David Thoreau’s Walden, an elegantly written record of his experiment in simple living. With this edition, Thoreau scholar Jeffrey S. Cramer has meticulously corrected errors and omissions from previous editions of Walden andhere provides illuminating notes on the biographical, historical, and geographical contexts of the great nineteenth-century writer and thinker's life.

Cramer’s newly edited text is based on the original 1854 edition of Walden, with emendations taken from Thoreau’s draft manuscripts, his own markings on the page proofs, and notes in his personal copy of the book. In the editor’s notes to the volume, Cramer quotes from sources Thoreau actually read, showing how he used, interpreted, and altered these sources. Cramer also glosses Walden with references to Thoreau’s essays, journals, and correspondence. With the wealth of material in this edition, readers will find an unprecedented opportunity to immerse themselves in the unique and fascinating world of Thoreau.

Anyone who has read and loved Walden willwant to own and treasure this gift edition. Those wishing to read Walden forthe first time will not find a better guide than Jeffrey S. Cramer.

Jeffrey S. Cramer is curator of collections, The Thoreau Institute at Walden Woods. He is the editor of Thoreau on Freedom: Attending to Man: Selected Writings of Henry David Thoreau.

"Meticulous and often fascinating annotations. . . . It is the paradox of Walden, and of all great literature that seeks to represent the real world, that by rooting his narrative so firmly in actualities of his own time and place, Thoreau created a work that remains vitally relevant to our own."—Robert Finch, Los Angeles Times

"A definitive text. . . . With Cramer’s notes, readers and rereaders will find the text both deeper and more accessible."—Julie Dunlap, Audubon Naturalist News

"The most authoritative edition of Walden yet to appear, an edition supported by the most extensive and useful annotations ever offered. Presenting the text and annotations in a side-by-side format, this is the best edition of the book for scholars because it not only includes annotations of just about everything in the text but also presents the most perfect text of Walden. Essential. All collections; all levels."—Choice

"[An] authoritative text with generous annotations."—Forecast

"Cramer’s [book] not only cleans up errors that have crept into previous texts but also adds biographical and historical context to Thoreau’s life."—Julia Keller, Greensboro News & Record

"For those who aspire to a deeper understanding of the man and his milieu, the annotated Walden, edited by Jeffrey S. Cramer, is the edition to choose."—Allan D. Smith, Trenton Times

"Readers will be intrigued by Cramer’s wide-ranging commentary and new bibliographical and historical background including stunning passages from Thoreau’s Journal and letters."—Richard Higgins, UU World

These titles, among 25 others, will be presented to librarians at the annual American Library Association meeting

"Thoreau's masterpiece—here freshly refurbished by Jeffrey S. Cramer—speaks to our material and spiritual condition as powerfully as on the day it first appeared.  Now, more than ever, Walden is our indispensable American book."—Alan D. Hodder, professor of comparative religion, Hampshire College

"Thoreau's masterpiece—here freshly refurbished by Jeffrey S. Cramer—speaks to our material and spiritual condition as powerfully as on the day it first appeared. Now, more than ever, Walden is our indispensable American book."—Alan D. Hodder, professor of comparative religion, Hampshire College

"Cramer’s notes are immensely useful. His edition of Walden will be a boon to ordinary readers and scholars alike."—Denis Donoghue, author of Speaking of Beauty

"Jeffrey Cramer's Walden is the most accurate and readable text of Thoreau's masterpiece. Cramer's version now replaces all other available editions of Walden as the most attractive and reliable way to approach this great American book."—Joel Porte, author of Consciousness and Culture: Emerson and Thoreau Reviewed

"Anyone who reads Thoreau in editions annotated by the great Jeffrey S. Cramer . . . will know everything there is to know about Thoreau and (amazingly) have a fun time learning it."—Sarah Payne Stuart, author of Perfectly Miserable: Guilt, God, and Real Estate in a Small Town

This feature require that you enable JavaScript in your browser.
END_OF_DOCUMENT_TOKEN_TO_BE_REPLACED

This feature require that you enable JavaScript in your browser.
END_OF_DOCUMENT_TOKEN_TO_BE_REPLACED

This feature require that you enable JavaScript in your browser.
END_OF_DOCUMENT_TOKEN_TO_BE_REPLACED