The Speeches of Frederick Douglass: A Critical Edition (Paperback) 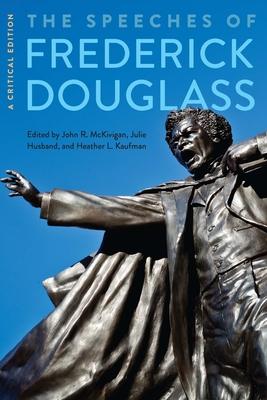 A collection of twenty of Frederick Douglass’s most important orations

This volume brings together twenty of Frederick Douglass’s most historically significant speeches on a range of issues, including slavery, abolitionism, civil rights, sectionalism, temperance, women’s rights, economic development, and immigration. Douglass’s oratory is accompanied by speeches that influenced him, his reflections on successful rhetorical strategies, contemporary commentary on his performances, and modern-day assessments of his rhetorical legacy.

"During the nineteenth century, Douglass was celebrated first and foremost as an orator of uncommon power. This terrific collection of Douglass’s greatest speeches, supplemented with compelling contextual materials, provides the best possible introduction to Douglass’s oratorical genius." — Robert S. Levine, author of The Lives of Frederick Douglass

"A cursory perusal of this masterful and unique compendium of Frederick Douglass's oratory quickly confirms why, unlike any of his contemporaries, Douglass became the conscience of a troubled country."—Richard Blackett, Vanderbilt University

“The Speeches of Frederick Douglass is an outstanding volume. The editors have succeeded in their goal of selecting, contextualizing, and annotating a representative sample of Frederick Douglass’s most important orations for a wide audience of readers.”—Glen McClish, San Diego State University

“I very much appreciate the inclusion of Douglass's own writings about his speaking, the reactions of contemporaries, and the critical pieces written by modern scholars. The combination of these elements with these thoroughly annotated, unabridged speeches provides a fascinating portrait of Frederick Douglass the orator.” — Richard W. Leeman, UNC Charlotte

This feature require that you enable JavaScript in your browser.
END_OF_DOCUMENT_TOKEN_TO_BE_REPLACED

This feature require that you enable JavaScript in your browser.
END_OF_DOCUMENT_TOKEN_TO_BE_REPLACED

This feature require that you enable JavaScript in your browser.
END_OF_DOCUMENT_TOKEN_TO_BE_REPLACED