Congress's Constitution: Legislative Authority and the Separation of Powers (Hardcover) 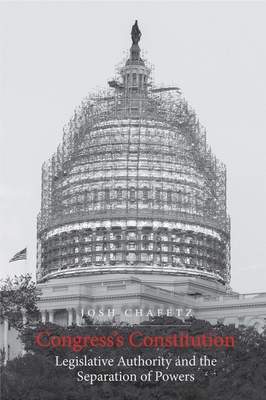 By Josh Chafetz
Email or call for price.
Special Order - may be out of print

A leading scholar of Congress and the Constitution analyzes Congress’s surprisingly potent set of tools in the system of checks and balances.

Congress is widely supposed to be the least effective branch of the federal government. But as Josh Chafetz shows in this boldly original analysis, Congress in fact has numerous powerful tools at its disposal in its conflicts with the other branches. These tools include the power of the purse, the contempt power, freedom of speech and debate, and more. Drawing extensively on the historical development of Anglo-American legislatures from the seventeenth century to the present, Chafetz concludes that these tools are all means by which Congress and its members battle for public support. When Congress uses them to engage successfully with the public, it increases its power vis-à-vis the other branches; when it does not, it loses power. This groundbreaking take on the separation of powers will be of interest to both legal scholars and political scientists.

Josh Chafetz is professor of law at Cornell Law School. His work has appeared in top scholarly journals and in national publications, including the New York Times and the Washington Post.

“A detailed, scholarly history . . . tracing the roots of Congress’s modern powers back to their English origins.”—Wall Street Journal

“An important book, and one that seems particularly timely.”—Jonathan Adler, The Volokh Conspiracy

“[A] particularly prescient study of congressional powers, challenging the conventional wisdom that describes the modern Congress as weak or ineffective.”—Choice

“Chafetz’s compelling new book, in combination with the presidency of Donald Trump, bids us to consider Congress’s roles and contributions in a new light.”—Washington Monthly

“The book reminds us that Congress is far from impotent in the face of encroachment, but its real value may lie in providing a deeply historical account of Congress within this framework of inter-branch rivalry.”—Ian Ostrander, Congress & the Presidency

"An impressive and important book. It provides perhaps the most authoritative account to date of how the constitutional powers of the legislative branch developed—as well as the effective and ineffective use of those powers, their contemporary constitutional status, and the most significant interpretive questions that remain open for constitutional debate."—Yale Law Journal

"Congress's Constitution is a commanding exposition of Congress's powers vis-à-vis the other branches of the federal government. It is an important read for scholars of administrative law, legislation, and the separation of powers, and it should be required reading for new congressional staffers and federal agency legislative affairs personnel."—Christoper J. Walker, Michigan Law Review

“An impressive accomplishment . . . demonstrating the ways in which Congress can still be relevant.”—Michael Gerhardt, Political Science Quarterly


“Chafetz is adept at covering decades, even centuries, of institutional ground in a narrow compass of pages. Few readers will finish the book without profiting from his synoptic vision and detailed knowledge of legislative and constitutional history.”—Aziz Z. Huq, Columbia Law Review

“A distinguished and authoritative work in the field of U.S. constitutional law as well as in the cross-cutting field of congressional studies.”—David Mayhew, Sterling Professor of Political Science Emeritus, Yale University

"While many bemoan the inevitability of an imperial presidency, Chafetz expands our constitutional imaginary, demonstrating the many routes through which Congress's relations with the executive branch, the public, and its own members undergird a responsible and vibrant politics. This is an outstanding new contribution to an important field."—Mariah Zeisberg , University of Michigan

"At a time when it is fashionable to dismiss Congress and the entire system of separated powers as broken, Josh Chafetz offers a brilliant reconstruction and defense of both. Rich in historical detail and institutional insight, Congress's Constitution is required reading for anyone interested in how the legislative branch shapes the constitutional order even when it is not legislating."—David Pozen, Professor of Law, Columbia Law School

This feature require that you enable JavaScript in your browser.
END_OF_DOCUMENT_TOKEN_TO_BE_REPLACED

This feature require that you enable JavaScript in your browser.
END_OF_DOCUMENT_TOKEN_TO_BE_REPLACED

This feature require that you enable JavaScript in your browser.
END_OF_DOCUMENT_TOKEN_TO_BE_REPLACED