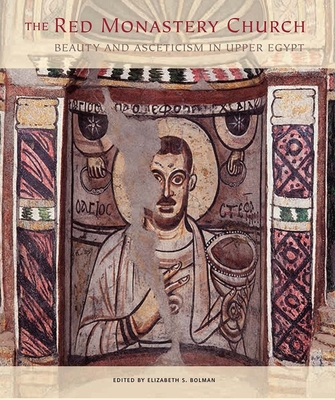 By Elizabeth S. Bolman (Editor)
Email or call for price.

The Red Monastery church is the most important extant early Christian monument in Egypt’s Nile Valley, and one of the most significant of its period in the Mediterranean region. A decade-long conservation project has revealed some of the best surviving and most remarkable early Byzantine paintings known to date. The church was painted four times during the 5th and 6th centuries, and significant portions of each iconographic program are preserved. Extensive painted ornament also covers the church’s elaborate architectural sculpture, echoing the aesthetics found at San Vitale in Ravenna and the Hagia Sophia in Istanbul.

Distinguished contributors from a wide range of disciplines, including art and architectural history, ancient religion, history, and conservation, discuss the church’s importance. Topics include late antique aesthetics, early monastic concepts of beauty and ascetic identity, and connections between the center and the periphery in the early Byzantine world. Beautifully illustrated with more than 300 images, this landmark publication introduces the remarkable history and magnificence of the church and its art to the public for the first time.

Published in association with American Research Center in Egypt, Inc.

Elizabeth S. Bolman is professor of art history at the Tyler School of Art, Temple University.

“Like the discovery of the Great Palace mosaics of Constantinople or the icons of Mount Sinai, Elizabeth Bolman's discovery of the Red Monastery paintings changes the face of Late Antique art. We are confronted now with the largest single unified program of Church decoration of the first millennium, with graceful figures articulating a sophisticated theological message that Bolman presents with masterful clarity.”—Thomas F. Mathews, author of The Clash of Gods: A Reinterpretation of Early Christian Art

"This enthralling book makes the exquisite, hitherto unknown Late Antique paintings of this Coptic monastery accessible and immediate with the world-changing jolts that very fine art history can still provide."—Glenn Peers, University of Texas at Austin

“[In this] splendidly produced volume, Elizabeth Bolman presents the results of the restoration work carried out by the American Research Center in Egypt at the Red Monastery. . . . The result, in Bolman’s justifiably proud words, is a ‘staggering spectacle.’”—Peter Brown, New York Review of Books
— Peter Brown

This feature require that you enable JavaScript in your browser.
END_OF_DOCUMENT_TOKEN_TO_BE_REPLACED

This feature require that you enable JavaScript in your browser.
END_OF_DOCUMENT_TOKEN_TO_BE_REPLACED

This feature require that you enable JavaScript in your browser.
END_OF_DOCUMENT_TOKEN_TO_BE_REPLACED