Diamonds: An Early History of the King of Gems (Hardcover) 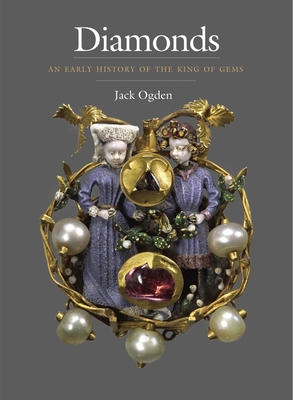 This richly illustrated history of diamonds illuminates myriad facets of the “king of gems,” including a cast of larger-than-life characters such as Alexander the Great, the Mughal emperor Jahangir, and East India Company adventurers. It’s an in-depth study tracing the story of diamonds from their early mining and trade more than two thousand years ago to the 1700s, when Brazil displaced India as the world’s primary diamond supplier.

Jack Ogden, a historian and gemologist specializing in ancient gems and jewelry, describes the early history of diamond jewelry, the development of diamond cutting, and how diamonds were assessed and valued. The book includes more than one hundred captivating images, from close-up full-color photographs of historic diamond-set jewelry (some previously unpublished), to photomicrographs of individual gems and illustrations of medieval manuscripts, as well as diagrams depicting historical methods of cutting and polishing diamonds.

Jack Ogden is a historian specializing in gems and jewelry. He has a Ph.D. from Durham University and is an elected Fellow of both the Society of Antiquaries and the Gemmological Association of Great Britain.

“A richly illustrated, in-depth account that covers 2,000 years of diamond jewelry and commerce, from the Indian mines to European merchants, courts, and workshops.”—Rapaport Magazine

“Ogden . . . has written another fascinating book. This exhaustive survey of the development of diamonds, the so-called king of gems, covers their history and symbolism, mining locations and methods, development and uses of diamond tools, and the trading and value assessment of diamonds.”—Choice

“Ogden’s work is important, original, and of sound scholarship. Jewelry historians will find this book a significant and magnificent contribution.”—Al Gilbertson, author of American Cut: The First 100 Years

“Diamonds is a remarkable history presented by a true story teller! Jack Ogden is not only an admired academic and a researcher of enviable skill, he has the rare ability to portray fascinating historic facts almost like an adventure story.”—David Warren, Senior International Jewellery Director, Christie’s

“Jack Ogden traces the ascent of the Indian diamond in world art, trade and history, also providing insights into the evolving styles and techniques of cutting the gem.”—Navina Haidar, Curator, Islamic Art, The Metropolitan Museum of Art

“There are very few published works that explore this subject, and certainly none that are based on as extensive a collection of research of the diamond and its history as a gemstone.”—Dr. Çiğdem Lüle, Kybele LLC

"From mystical myths to majestic power, Jack Ogden's history of diamonds is testimony to the eternal desire for the king of gems. His stories transcend the magnificent gems to the people behind them—from Indian miners to European royalty, for whom diamonds were the ultimate symbol of wealth and power."—Martin Rapaport, Chairman, Rapaport Group

This feature require that you enable JavaScript in your browser.
END_OF_DOCUMENT_TOKEN_TO_BE_REPLACED

This feature require that you enable JavaScript in your browser.
END_OF_DOCUMENT_TOKEN_TO_BE_REPLACED

This feature require that you enable JavaScript in your browser.
END_OF_DOCUMENT_TOKEN_TO_BE_REPLACED