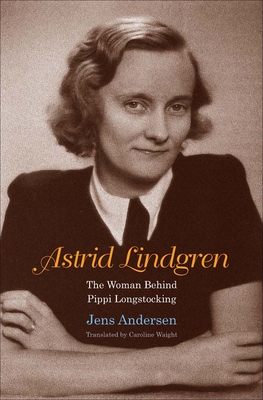 A powerful biography of the internationally renowned writer who created one of the most enduring characters in children’s literature, Pippi Longstocking

“[An] Insightful, elegantly written biography of the beloved author of the Pippi Longstocking tales, a complex woman of parts. . .  Readers who grew up on Lindgren's stories will find this excellent book irresistible—and often surprising.”—Kirkus Reviews, Starred Review

The first English-language biography of Astrid Lindgren provides a moving and revealing portrait of the beloved Scandinavian literary icon whose adventures of Pippi Longstocking have influenced generations of young readers all over the world. Lindgren’s sometimes turbulent life as an unwed teenage mother, outspoken advocate for the rights of women and children, and celebrated editor and author is chronicled in fascinating detail by Jens Andersen, one of Denmark’s most popular biographers.

Based on extensive research and access to primary sources and letters, this highly readable account describes Lindgren’s battles with depression and her personal struggles through war, poverty, motherhood, and fame. Andersen examines the writer’s oeuvre as well to uncover the secrets to the books’ universal appeal and why they have resonated so strongly with young readers for more than seventy years.

Jens Andersen is an award‑winning author whose works include a highly acclaimed biography of Hans Christian Andersen. He lives in Denmark and serves as literary critic for several Danish newspapers. Caroline Waight is an award‑winning freelance translator from Danish and German.

“A touching biography of [Pippi Longstocking’s] creator Astrid Lingren sheds new light on the genesis of her most celebrated creation. . . she continues to inspire fresh generations to follow in her outsize footsteps.
—Lydia Slater, Harper’s Bazaar

“Lindgren is an absolute gift to a biographer. She was an industrious letter writer and diarist, and her life both reflected and embodied some of the most significant political and social shifts of the 20th century. . . [Andersen] is masterful at elucidating the accumulative private sorrows that shaded the inner life of this industrious woman, who wrote such enduringly exuberant stories.”
—Claire Allfree, Daily Telegraph

“[An] Insightful, elegantly written biography of the beloved author of the Pippi Longstocking tales, a complex woman of parts. . .  Readers who grew up on Lindgren's stories will find this excellent book irresistible—and often surprising.”—Kirkus Reviews (starred review)

“Filled with photos and remarkable details from Lindgren’s voluminous diaries, Andersen’s biography is a delight.”—Publishers Weekly

“Andersen incisively and resonantly chronicles the evolution of Lindgren’s progressive work and its impact, along with her influence as a children’s-book editor and environmental activist, bringing to new light a writer as empowered and exhilarating as her most cherished creation.”—Booklist, starred review

“If one woman could embody the trajectory of the 20th century, I nominate Astrid Lindgren. She emerges from this absorbing biography as a feminist, writer, campaigner for children’s rights, visionary humanist, and a model of the intelligent life well-lived.”—Meg Rosoff, international best-selling author

“This is the definitive biography of the author of Pippi Longstocking. Astrid Lindgren emerges as a fully formed artistic, political, and social figure: a Scandinavian modernist who produced works of world literature.”—Seth Lerer, author of Children's Literature: A Reader's History, from Aesop to Harry Potter

“It is no small achievement to have brought to life an author already so alive in the minds of her readers, but Jens Andersen has done it. This is a wonderfully sympathetic and intimate portrait of a writer we all thought we knew.” — Morten Høi Jensen, author of A Difficult Death: The Life and Work of Jens Peter Jacobsen

“Andersen tells Lindgren’s story with befitting adroitness and charm. This biography will raise the care and interest with which scholars and admirers alike approach Pippi Longstocking for years to come.”—Heather Klemann, Yale University

This feature require that you enable JavaScript in your browser.
END_OF_DOCUMENT_TOKEN_TO_BE_REPLACED

This feature require that you enable JavaScript in your browser.
END_OF_DOCUMENT_TOKEN_TO_BE_REPLACED

This feature require that you enable JavaScript in your browser.
END_OF_DOCUMENT_TOKEN_TO_BE_REPLACED