Convoys: The British Struggle Against Napoleonic Europe and America (Hardcover) 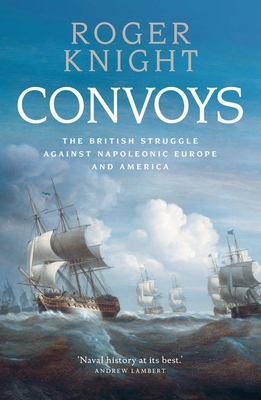 During the Napoleonic Wars thousands of merchant ships crisscrossed narrow seas and wide oceans, protected by Britain’s warships. These were wars of attrition and raw materials had to reach their shores continuously: timber and hemp from the Baltic, sulfur from Sicily, and saltpeter from Bengal. Britain’s fate rested on the strength of its economy—and convoys played a vital role in securing victory.

Leading naval historian Roger Knight examines how convoys ensured the protection of trade and transport of troops, allowing Britain to take the upper hand. Detailing the many hardships these ships faced, from the shortage of seaman to the vicissitudes of the weather, Knight sheds light on the innovation and seamanship skills that made convoys such an invaluable tool in Britain’s arsenal. The convoy system laid the foundation for Britain’s narrow victory over Napoleon and his allies in 1815 and, in doing so, established its naval and mercantile power at sea for a hundred years.

Roger Knight is curator emeritus at the National Maritime Museum, Greenwich. He is author of several books including the prize-winning The Pursuit of Victory and Britain against Napoleon.

“Naval history at its best. A challenging text that examines the critical role of the British convoy system in the Napoleonic era, a partnership that bound the state, trade, the Royal Navy and the insurance industry, and foreshadowed the better-known, but no less vital convoy systems of the World Wars of the twentieth century.”—Andrew Lambert, author of Nelson: Britannia's God of War
— Andrew Lambert

“This is an outstanding study of a vital and too-long neglected element of British power during the Napoleonic War. Knight takes us into the daily lives of those who worked on these dangerous missions, explodes many old myths and makes an important contribution to developing our understanding of life at sea in this period.”—Richard Harding, author of Naval Leadership in the Atlantic World
— Richard Harding

“Outstanding. Roger Knight brilliantly tells the forgotten story that underpinned Britain’s survival and ultimate victory in the war against Napoleon. Authoritative and original, this will appeal to all readers with an interest in the Napoleonic Wars.”—Rory Muir, author of Wellington: The Path to Victory 1769-1814
— Rory Muir

This feature require that you enable JavaScript in your browser.
END_OF_DOCUMENT_TOKEN_TO_BE_REPLACED

This feature require that you enable JavaScript in your browser.
END_OF_DOCUMENT_TOKEN_TO_BE_REPLACED

This feature require that you enable JavaScript in your browser.
END_OF_DOCUMENT_TOKEN_TO_BE_REPLACED