The Evolution Of Weapons And Warfare (Paperback) 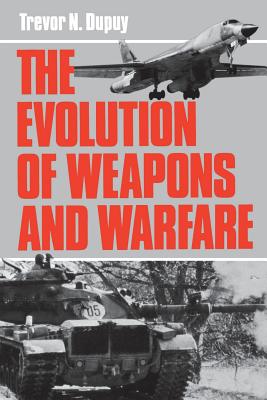 The Evolution of Weapons and Warfare is not only a historical study of mankind's most time-honored enterprise--war--but an excellent way to understand the potentiality of modern weapons, techniques, and technologies, and to realistically forecast how they will be applied in future wars. In this absorbing chronicle of the art of war, Colonel Dupuy examines the relationship between weapons and strategy--on land, on sea, and in the air--and discusses the eighteen major advances in weapons lethality, from the Macedonian sarissa (the long pike used by the armies of Alexander the Great) to the atomic bomb. Dupuy emphasizes two major paradoxes: although weapons have become increasingly deadly, battle casualty rates have just as steadily declined; and despite tremendous technological changes in warfare, the fundamental principles of war have changed little. But this book not only deals with ideas and technological advances, it confronts the drama and horror of battle. Far more than a textbook summary, it is an engrossing account of the development and use of the most significant weapons human ingenuity has been able to devise, and an acute commentary on the essence of warfare.

Colonol Trevor N. Dupuy is the author of over 25 books, including the nineteen-volume Military History of World War II and Elusive Victory: The Arab-Israeli Wars.

This feature require that you enable JavaScript in your browser.
END_OF_DOCUMENT_TOKEN_TO_BE_REPLACED

This feature require that you enable JavaScript in your browser.
END_OF_DOCUMENT_TOKEN_TO_BE_REPLACED

This feature require that you enable JavaScript in your browser.
END_OF_DOCUMENT_TOKEN_TO_BE_REPLACED